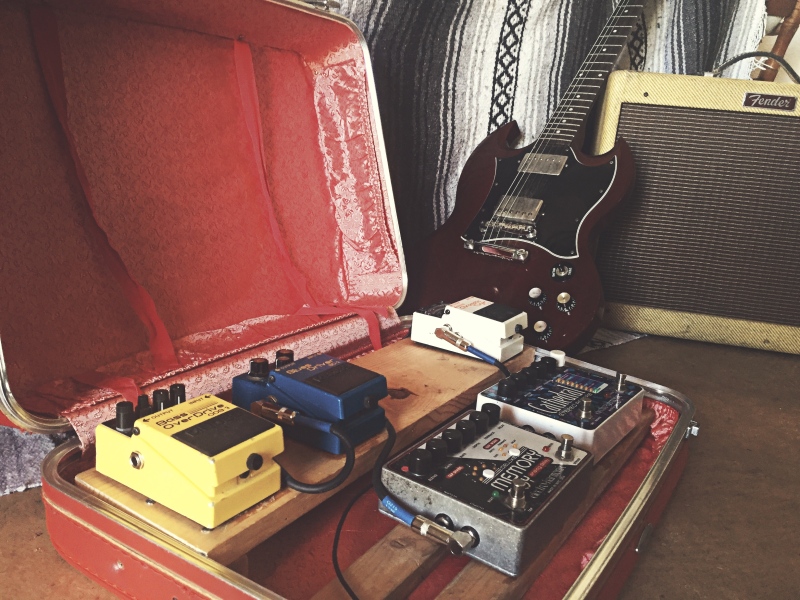 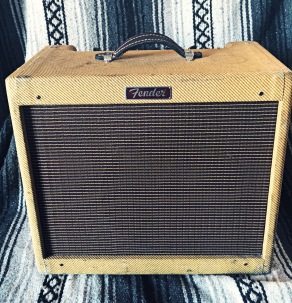 I’ve gone through about five guitars and six amps before deciding on this setup. I’ve played a Jaguar, Tele, Gretsch Electromatic and some Japanese Teisco’s. But none of them compare to the Gibson. This SG actually belongs to my husband and drummer [Brett “Puck” Patterson]. It was gifted to him by a high school friend for his 21st birthday.

Same thing goes for my amp. I’ve played through a Vox AC15, Fender silverface Champ, Gretsch Electromatic, Marshall 4×10 and a Fender Deville before deciding on my Blues Jr. Something about the tubes powering up a small speaker creates a wonderfully clean and warm tone that I love. The little 15w amp and 12” speaker make every guitar coming though sound great. It makes the SG sound perfect and it makes the mustang sound crisp and twangy.

2. What song of yours is the best portrayal of your particular sound/style?  Right now, we’re working on some new stuff that I really feels captures the sound and direction I’ve wanted for a while. Of the stuff we’ve already released, I would say “Don’t Walk Away” from our second EP because it encompasses a lot of the elements that we like to use in our songwriting: ambient guitar, slide guitar, driving drum beat, vamping, catchy vocals and harmonies.

3. If money was no object, what’s the one “holy grail” piece of gear you’d buy?  I would say either a Gretsch White Penguin or Fender Esquire through a Fender Bassman 4×10 with all of the pedals that Earthquaker Devices makes. The Gretsch White Penguin is just beautiful. It’s a completely unique instrument that you rarely see. The Esquire is hands down one of the classics. A real ‘50s Fender Bassman is just so…dreamy. And Earthquaker pedals would just be fun to mess with.

4. Who is the musician you admire most sound/gear-wise?  My favorite local artist would be Tommy Garcia from Mrs. Magician. His guitars, Satellite amps and style of playing are the quintessential San Diego guitar sound. [See his Gear and Loathing rig here] My favorite national artist would be Dave Grohl. More as a drummer than a guitarist, but mostly as an engineer and proponent of music in general.

5. What do you have coming up?  March 26 we’re throwing a house party and shooting a music video for our upcoming single, “High Deserts” [INFO]. We’re also working releasing a 4-track tape through Weiner Records due out by the end of April. Lastly, we are booking a West Coast tour in June. We already have the Standard in Hollywood and ACE hotel in Palm Springs booked.