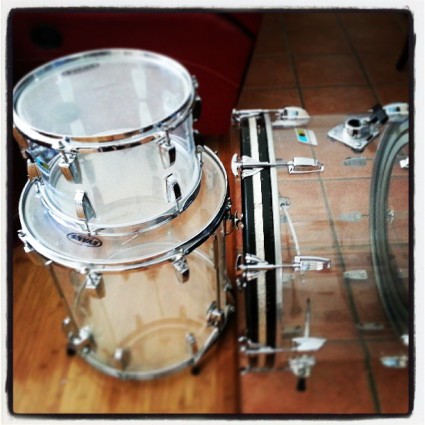 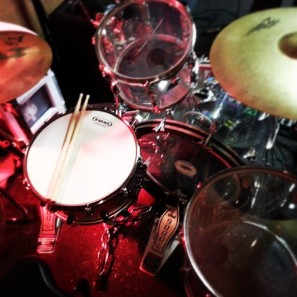 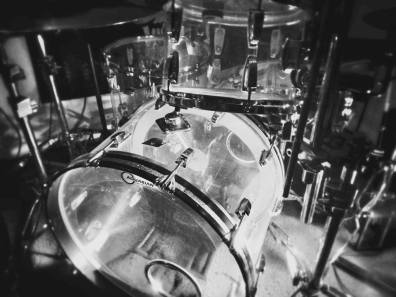 1. Tell me about your current rig: Why do you use what you’re using? Anything special?  From the first time I saw John Bonham playing Ludwig Vistalite drums, I knew that I had to own a kit like that someday. One of my favorite drummers of all time, Chris Robyn from Far, played a multi-colored Vistalite kit, which only furthered my interest. So when the opportunity to purchase a vintage clear Vistalite kit from the early ’70s presented itself, I jumped on it. I loved the look of the acrylic shells and also the huge sound that the drums produced. One particularly rare thing about my kit is that all the drums have matching badges and serial numbers (except the snare, which I purchased separately). The drums have all the original hardware, including the internal dampeners which I currently only use during recording sessions.

2. What song of yours do you feel is the best portrayal of your particular sound/style? Out of our currently released material, I would say that the song “We Want It” is a good portrayal of our music and my drumming style. We have a video for this song that’s a compilation of our live shows.


3. If money was no object, what’s the #1 kit you’d buy?  If money wasn’t an issue, I would love to own the Ludwig Vistalite Zep kit (re-issue) in amber.

4. What was the first piece of gear you bought and what are your thoughts on it now? The first piece of musical equipment that was purchased for me was, ironically, a guitar that was a birthday present from my parents. I tried to learn how to play it but it just didn’t hold my interest. That’s when I realized that I was a drummer, not a guitarist.

5. What do you have coming up?  We are currently working on finishing our second full length album titled Sea of Stones, which will be released within the next few months. We’re excited to be playing a show at The Merrow this coming Tuesday (April 12th) presented by 91X and Halloran with Dark Water Rebellion and the Heather Nation Band. We’ll be playing a lot of new songs from our upcoming album as we prepare for our CD release.