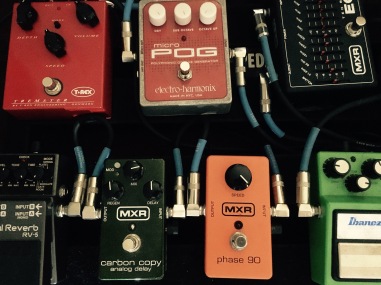 1. Tell me about your current rig: I never really use the Tube Screamer, and the EQ is just to prevent feedback when I play my hollowbody. I only use the Tremster on one Lulls song, and everything else is to create dynamics. My sound is based predominantly on stereo routing my Jazzmaster to my Holland Mini Jimi (a boutique tube amp that gives me just the slightest bit of unpredictability) and my Jazz Chorus (a solid state that recreates the same lush, clean tone every time). Tone above all. I hate mids so I cut them out completely (our ears hear enough of them as it is). The cleaner the guitar to amp sound, the more control I have over it with my playing and with my pedalboard. I start with a blank canvas and then add color only where it’s needed. I’m not just pouring out all of the paints at once; I’m mixing the right colors in the right proportions to create the scene I want.

For moments of breath, I use my digital reverb, which is always on the modulate setting. Adding a medium delay to the modulated reverb gives it a little extra kick in the ass. Using a phaser too much can get cheesy, but I like the effect of having it on the fastest speed to accentuate certain beats and make it seem like there’s another instrument coming in. The POG is to make up for the deficit of another guitar since the Lulls are just a trio. If we count my entire career in music, I guess you could say it took me 18 years to build this pedalboard the way it is now, but it has always been a fluid and reflexive process. Sometimes I think I want a pedal to create a certain sound, but then I realize it does this other thing too, so I go with that. The pedal fucks with me as much as I fuck with it. In general, my philosophy is: “The fewer the knobs, the better.” But what can I say? I’m a Swedish minimalist.

2. What’s your favorite piece of gear?  I don’t have favorites, but if I had to pick based on sentimental value, I would say my guitar. That Jazzmaster (an original, by the way) was given to me by my dad, who got it for free when he was 18 and impulsively decided to strip off all of the white paint (hallelujah).

3. What song of yours do you feel is the best portrayal of your sound/style?  My goal with my sound is defamiliarization (a term used by Russian formalists in the early 20th century to describe the way poetry works). I’m not a big fan of the whole dirty rock and roll guitar sound. At one point, it was innovative, but now it’s too recognizable. I want people to be surprised. I want them to go, “What the fuck instrument is that and how the fuck is only one instrument making all of that sound?” On a more specific level, I think a lot about the sound of water and how I can make my guitar sound like different forms of water. As such, I would say that either “Tyrant” or “Calafia” [listen to the song here], off of our upcoming album, demonstrate those sorts of things most evidently.

4. Who do you look up to the most sound/gear-wise and why?  I admire a lot about Daniel Rossen’s [Grizzly Bear] style and tone. Subtlety and intricacy. And the tones he gets on record. Good god. I tend to like very clean, pure sounds à la Ray Phiri, David Longstreth, and jazz guitarists like Kurt Rosenwinkel. Maybe I just like guitarists that have similar last names to mine.

5. What do you have coming up?  We’re waiting on some mixes to come back and brainstorming music videos, single releases, and eventually our album release. My pedalboard is featured in many permutations on this upcoming album, I’ll tell you that.

Be sure to catch The Lulls on Thursday, April 21, at Soda Bar with Haunted Summer, Garden Echo, and Annie Girl and the Flight. Tickets are available here.