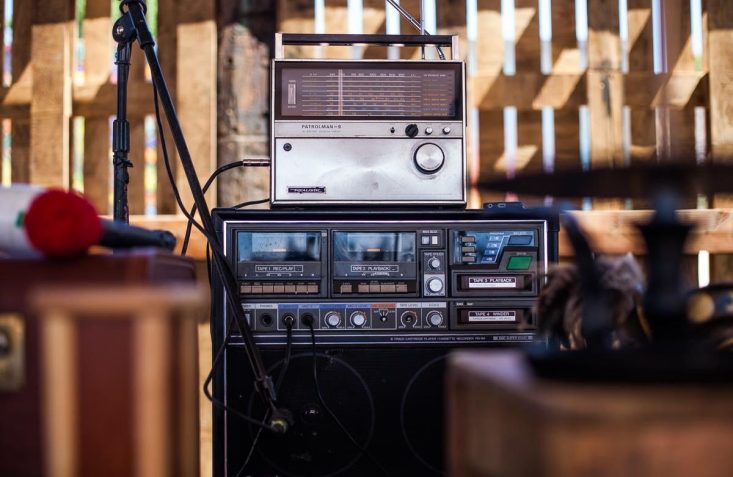 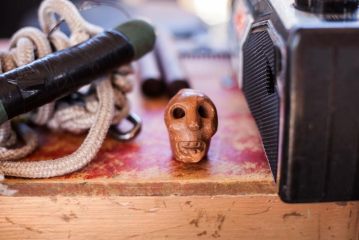 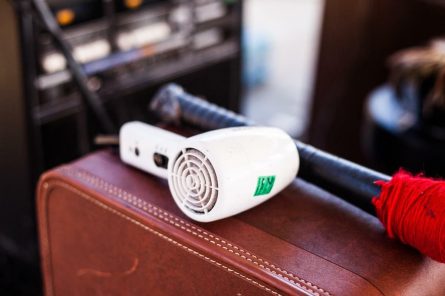 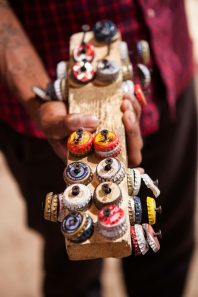 1. Tell me about your weird-ass setup.

I’d refer to my rig as post-Sanford & Sons, but pre-MacGuyverian. It’s about as dangerous as a badger with rabies being walked by a Trump supporter, but it gets the job done. It’s mostly derived from me not being particularly good at music, so if I play a saw blade people say “Holy shit, that guy’s playing a saw blade” instead of “holy shit, that guy sucks, lets boo him and throw tomatoes!” Not sure if they still throw tomatoes at acts, but I’m not above playing a Farmer’s Market, so…… I got a couple of interesting things in this hodgepodge of bullshit that looks like Kobey’s Swap Meet vomited on Home Depot after drinking shots of rubbing alcohol and Robitussin (we called those Rubbitussins).

I got this karaoke machine that has two fucking 8-track players in it. Seriously, TWO FUCKING 8-TRACK PLAYERS. One day, I’ll drop the first Scorps 8-track in there, for some between-sets filler. That first record is good, Lonesome Crow, don’t sleep on that shit. Anyway, it’s got some inputs for a microphone so you could sing a shitty version of “Sweet Child O’ Mine” for your homies, but I run a circuit-bent radio to it and totally misuse this ratty ‘80s echo effect. This thing gets LOUD AS FUCK and sounds ugly as Iggy Pop’s stomach skin. Which is the goal. And if there’s some kid on LSD at your set, you can totally make him weep. Speaking of LSD, my buddy made me this circuit-bent radio. I went over to his house to pick it up on a Tuesday and he was like “you wanna drop some acid?” I was like, “are you fucking serious? It’s a Tuesday and I’m 35.” And he was like “whatever.” This little guy makes me wish I wasn’t such a pussy and I could pop a couple weekday hits and just tweak out for hours. It sounds like fucking space people arguing about space bullshit. He explained to me how to make one, but I feel like you really need to drop acid midweek to perfect it, so I’ve yet to do it. Shine on, you crazy diamond!

I got this wooden doodad made of drywall screws and bottlecaps. This fucker is dangerous. I call it the tetanus clap, cause I’m sure this’ll provide you with tetanus. I mean shit, it’s all rusty and pointy. It doesn’t even sound like anything and it hurts to play. I’m sure Ramsey’ll press it to some pregnant woman’s gut on a episode of Game Of Thrones when you thought they couldn’t shock you anymore and you wished they wouldn’t. I used to have a bunch of bottlecap instruments. My sober ass asked a friend to get some bottle caps for me. She came back wasted with this huge bag of bottle caps. She risked alcohol poisoning to bring you this thing and I never even use it. Ha. Idiot. The Heineken caps sound best, but she didn’t wanna drink that shit. I have a huge bucket full of bottlecaps, I’m gonna make some awesome shit one day, but since I borrowed Marissa’s HBOnow password, I really don’t have time to be making stuff.

Let’s see, what else. I got this saw blade. The first saw blade I incorporated was literally out of tune with everything, so I ruined a lot of songs by hitting it along with the last chord, but it was fun to see the jazz guys die a little inside at the clashing of notes. The next one I got was much less offensive. Now bandmates and soundmen just get pissed when they bump into it and cut themselves.

One time, I was in the adjacent urinal to this old hippie at a music festival. I walked up and started my business after him and when I left, he was still pissing. I waited cause I realized something magical was happening. He pissed longer than a live Allman Brothers song. It was insane. This rainstick is like that old man. It makes rain sounds for days. I left it at The Casbah once. Nothing worse for a guy trying to eclipse the fact that he had dreadlocks and owned a Spin Doctors cassette single than getting getting a call from The Casbah saying “you left your rainstick here”!

Sometimes I use this hair dryer to get an atmospheric wash sound, but the goddamn thing sucks so much electricity, it shut down the stage at Art Walk. It also smells like burnt ferret hair. Lastly I have this skull that sounds like ocean waves. It literally looks like a shrunken head, and who the fuck knows, it may well be. All I know is it sounds good and I’m probably making a mockery of some ancient tradition and will likely be cursed within the year.

2. On what song of yours is your stuff best portrayed?

If you notice my input on our recordings then I’m doing it wrong. For all the loud clamoring my instruments make, they’re best served with subtlety, accentuating what’s already been recorded by a killer rhythm section. “Crave” on the Dani Bell & The Tarantist Dark West record has a lot of elements that are understated. It starts with this ‘60s Acetone drum machine that gives way to real drums; there’s a spray bottle we used to discipline Erik Canzona’s dog drenched in reverb, doubled with a box of couscous cause I’m old school and haven’t started playing on quinoa yet. The intention is to add something slightly unusual to a familiar rhythmic pattern, perhaps it’ll make the ears perk up when you listen in headphones. There’s a lot of stuff I’m really proud of on the new Midnight Pine record, a lot of patience on the short wave radio to find some really psychedelic sounds to weave in and out, a large piece of sheet metal to get some thunderous atmospherics and lots of circuit-bent radio acting like a Theremin, that’ll be out late summer/early fall.

3. If money was no object, what’s the one piece of junk you’d buy?

I’d get a 36-inch chain and a Mellotron.

4. What’s next for you and your bands that people should know about?

Photos by Kristy Walker. See more of her work here.