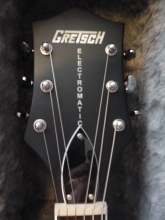 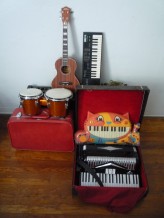 1. Tell me about your current rigs: Best parts? Worst parts?

[Joe MacAskill] I’m using a Gretsch Electromatic hollow body. Just got it a couple months ago online. It’s the most expensive guitar I’ve owned which isn’t saying much, but I love it. I’m playing through a Vox  Valvetronix Modeling amp which has way too many settings, and if you’re ADD, it just might make your head explode. I got it for next to nothing at our former pawn shop hookup which is no longer a thing. The amp really isn’t loud enough so it’s on it’s way out, for a bigger Vox. Pedal-wise, I have a Boss ME-50 which has too many settings also, and I don’t have the patience to get it to do what I think it can probably do. I use various pedals as well that do the same thing as the Boss pedal, but I’m not smart enough to combine them all. I also have a vintage Boss EQ that goes for a lot online. I have it in my rig to make people jealous. Jaye plays a neat Univox bass she got at a vintage guitar shop online a few years back.

2. What song of yours is the best representation of your sound/style?

The song that best reflects our style is “I Think My Boyfriend’s Gay For Morrissey.” Lots of delay and chorus and fun little guitar lines that Johnny Marr may have done in his teens. Most of our material is punk-rockish type stuff, or on a ukulele. It was nice to write something that made me remember how to play listenable guitar lines.

3. If money was no object, what would be your “holy grail” purchase?

My “Holy Grail” equipment would have to be a Gretsch Falcon, which I didn’t know existed until last week. You could drop it and it would sound nice. And it’s really big, so it may even have a slimming effect on me! And it’s only $12,000! I guess I’d settle for a 1966 Fender Jaguar. It’s only $2,500! Jaye is holding out for a Gretsch acoustic bass. And maybe a better wedding ring. And harkening back to my metal days, a Marshall stack would be nice and an interesting conversation piece for house visitors.

4. Any local musicians (or otherwise) you admire gear-wise?

For musician admiration, I’d have to go with Zach Condon of Beirut. He plays a Lanakai ukulele, and it’s a $100 ukulele. How punk rock is that?! He tours with it, records with it, everything. I bought one and it really is amazing. I bought the higher-priced model for touring but still use the cheapo model for recording. You’d think he’d be endorsed and only play the top of the line model, but nope! Jaye is a big Simon Gallup of The Cure fan as far as bass goes, but I just can’t sell her on Geddy Lee. And she’s Canadian!

5. What’s next for Pony Death Ride?

We just finished recording our new record, Cat Sounds. It’s all about cats! And we got new costumes and are making some videos. The release date will be Sept. 6. We will be taking our little musical comedy act to a couple different burlesque and comedy festivals as well this summer along with promoting the the album.