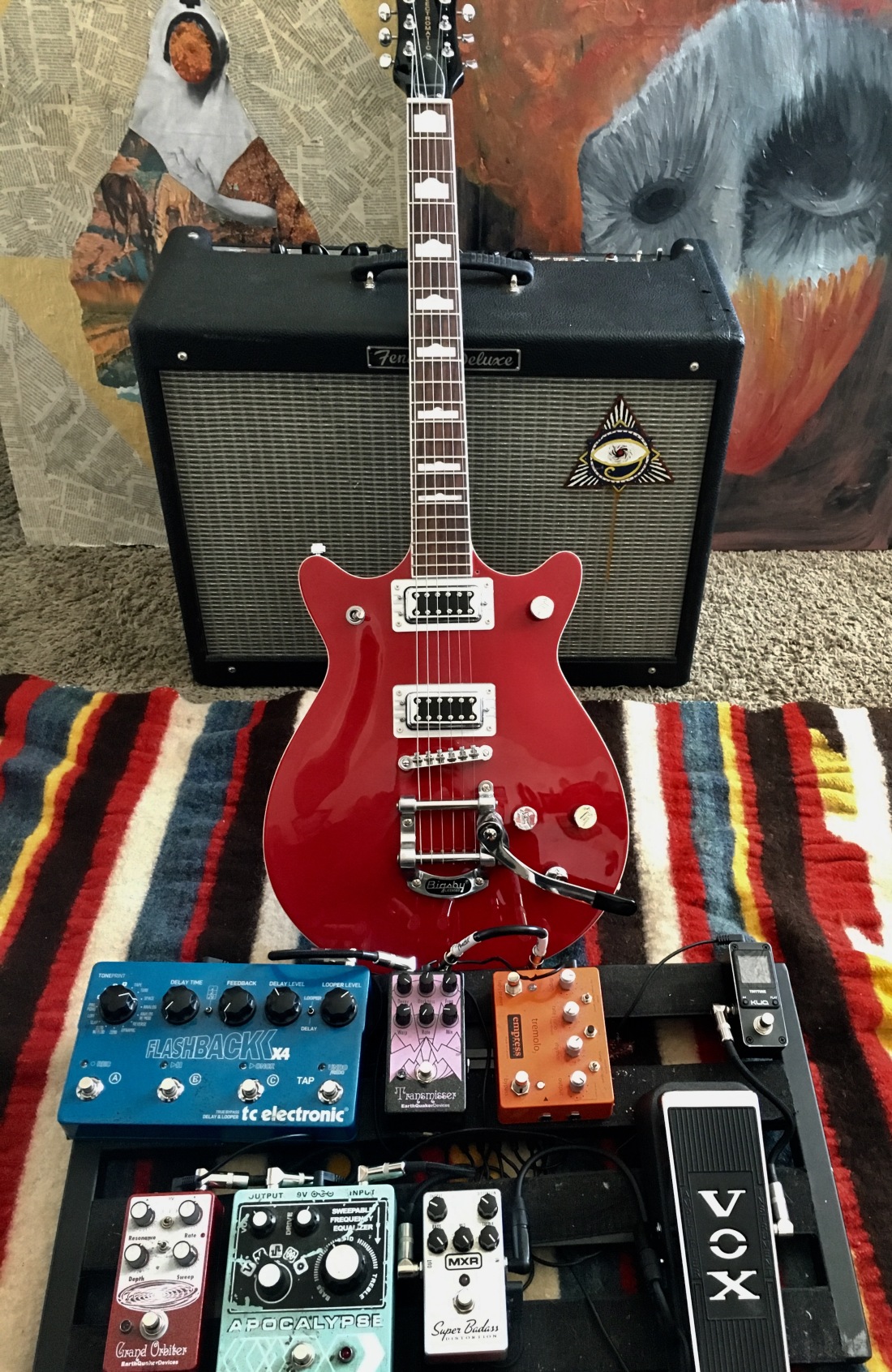 1.Take me through your pedalboard: What are you using and what are your favorite pedals?

We got the Vox Wah Wah, the MXR Bad Ass Distortion, the Death By Audio Apocalypse, Earthquaker Devices Grand Orbiter, Empress Tremolo, Earthquaker Devices Transmissor, and last but not least, the TC Electronic Flashback Delay. I’m definitely a delay junky so that Flashback gets me a lot of mileage, especially because I can navigate my way through three different settings so quickly with that pedal. However, that being said, more than any specific pedal, I’m more into what certain combinations can get me sonically. It’s taken me a while but I’ve found a balance in the possibilities on this board and most of the time, I have more than one running.

2. That’s a beauty of a Gretsch: What made you want to play that particular guitar?

First and foremost, I’ve always been a huge Neil Young fan. Always loved loved the brittle rust tone he gets out of the White Falcon. I’ve owned other Gretsch guitars but this one I got out of necessity because my trusty Epiphone Les Paul was on the fritz and I couldn’t get it fixed before some upcoming shows. She’s certainly a beauty with some real bedroom eyes! The feel on the neck and her body are great but her personality is kind of hard to deal with (certainly a reoccurring story in my life). She has that Gretsch twang but bites more than any I’ve ever played. For Bad Vibes, I find myself dialing back the high end on the amp to keep the midrange of my tone while trying not to lose the personality of the guitar. It basically makes me dig in on the action if I want that bite — which isn’t too hard since I lack any finesse as a player. 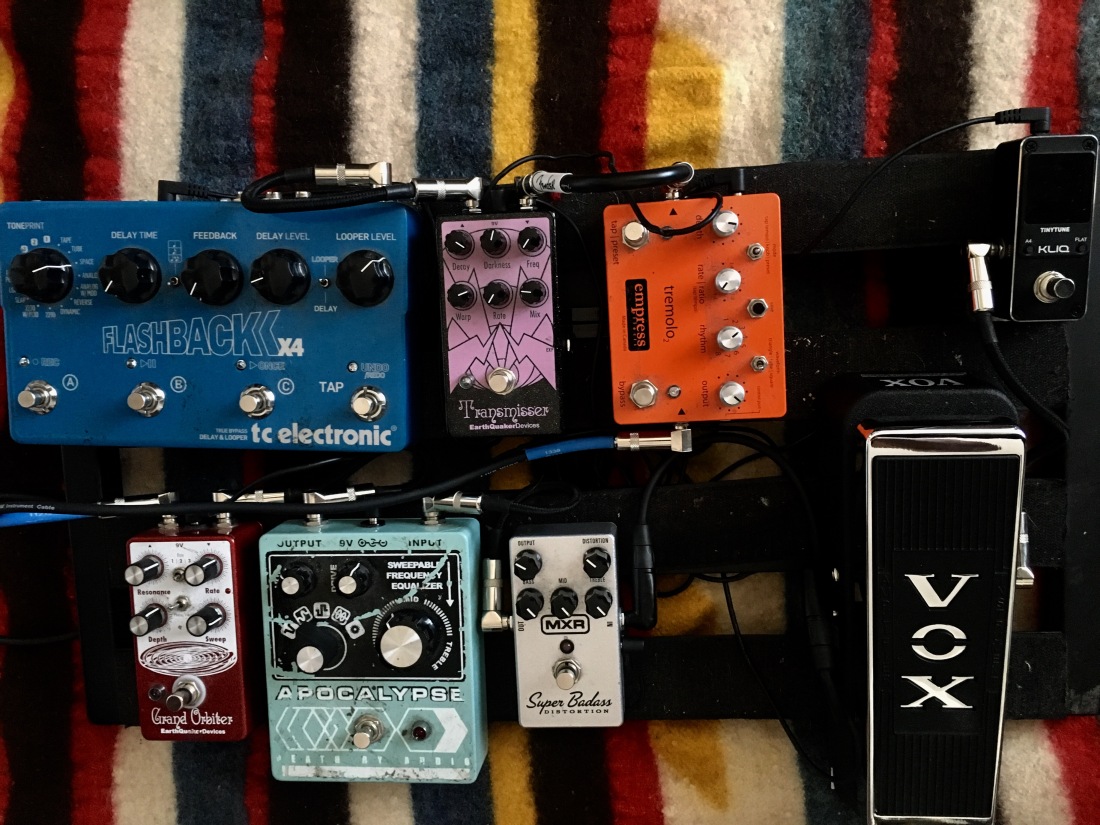 3. That pedalboard is seriously impressive: Talk to me about that Death By Audio pedal — what does it do and what do you use it for?

Fuck man, that pedal is fucking nuts — it’s a touchy touchy pedal that has to be readjusted every time it comes out the case. Basically it has five fuzz circuits that you can select from and then a tone knob that shifts the frequency. Live, I mainly use what they call the Gainiac setting at two o’clock for riffs on “Cathedrals” and on call-and-response solos that take place on a new song called “The Tower.”

4. What’s a Bad Vibes song that you think really showcases your gear?

Most definitely “Vultures”: I think I use every single pedal on that song, which seems fitting since it’s our rock opera/war dance. 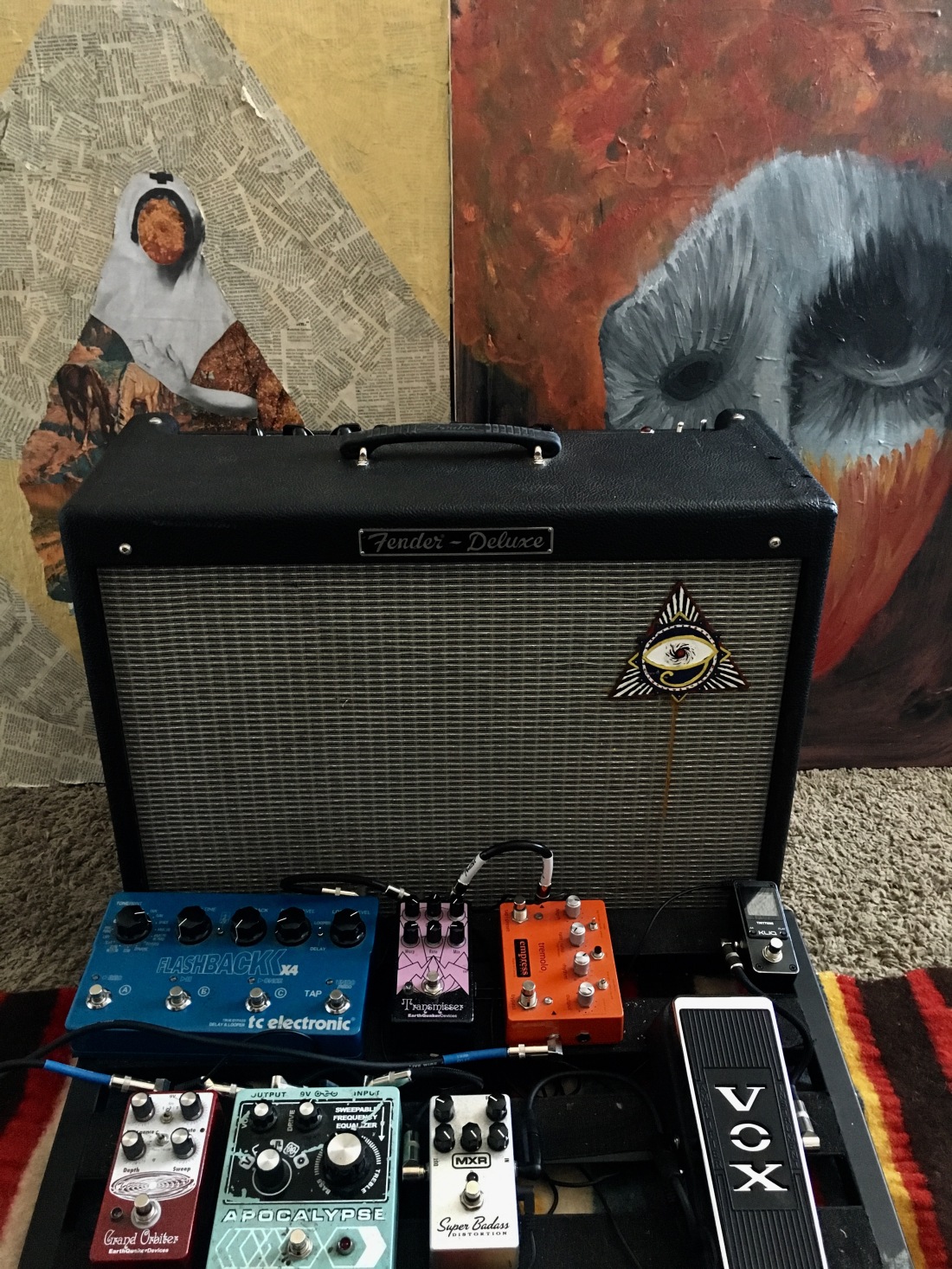 5. Talk to me about the new album: What makes it special to you?

This is the band’s first record and we are putting it out on Daniel Cervantes’ (Mrs. Henry, Creature and the Woods) label, Blind Owl. Its special for many reasons but as an individual, I’ve never been able to focus long enough to put a record together, so there’s a sense of accomplishment and fear in that. For the band, we’ve been through a whole lot of struggles, smiles and cries, freedoms and arrests — you know, life — during the making of this album, which is why it gets the title No One’s Safe. This music is the result of that wild ride and it was recorded at Le Chateau de Bad Vibes, a house long
known for hosting parties till 9 a.m. involving fireworks, impromptu jams and what the Latin community would call “convivios.” The songs are embalmed in that energy and remind me of wonderful and horrible times in my life. The songs have changed a lot and continue to do so, but I think we will relish this moment, take a breath and continue on in a new direction.

We’ve already started work on a new EP being recorded and engineered straight to tape by Jordan Andreen over at Audio Design. We will be playing hometown shows but really trying to get out of town by doing small one-off weekend tours followed by an extensive one in late fall/early winter. We also have plans to begin recording the second album in collaboration with Mr. Andreen and Mr. Cervantes as co-producers. We are also most immediately thankful to you and everyone that has helped us along the way — come take intoxicants with us and dance naked or clothed… please… now… don’t make me ask again.