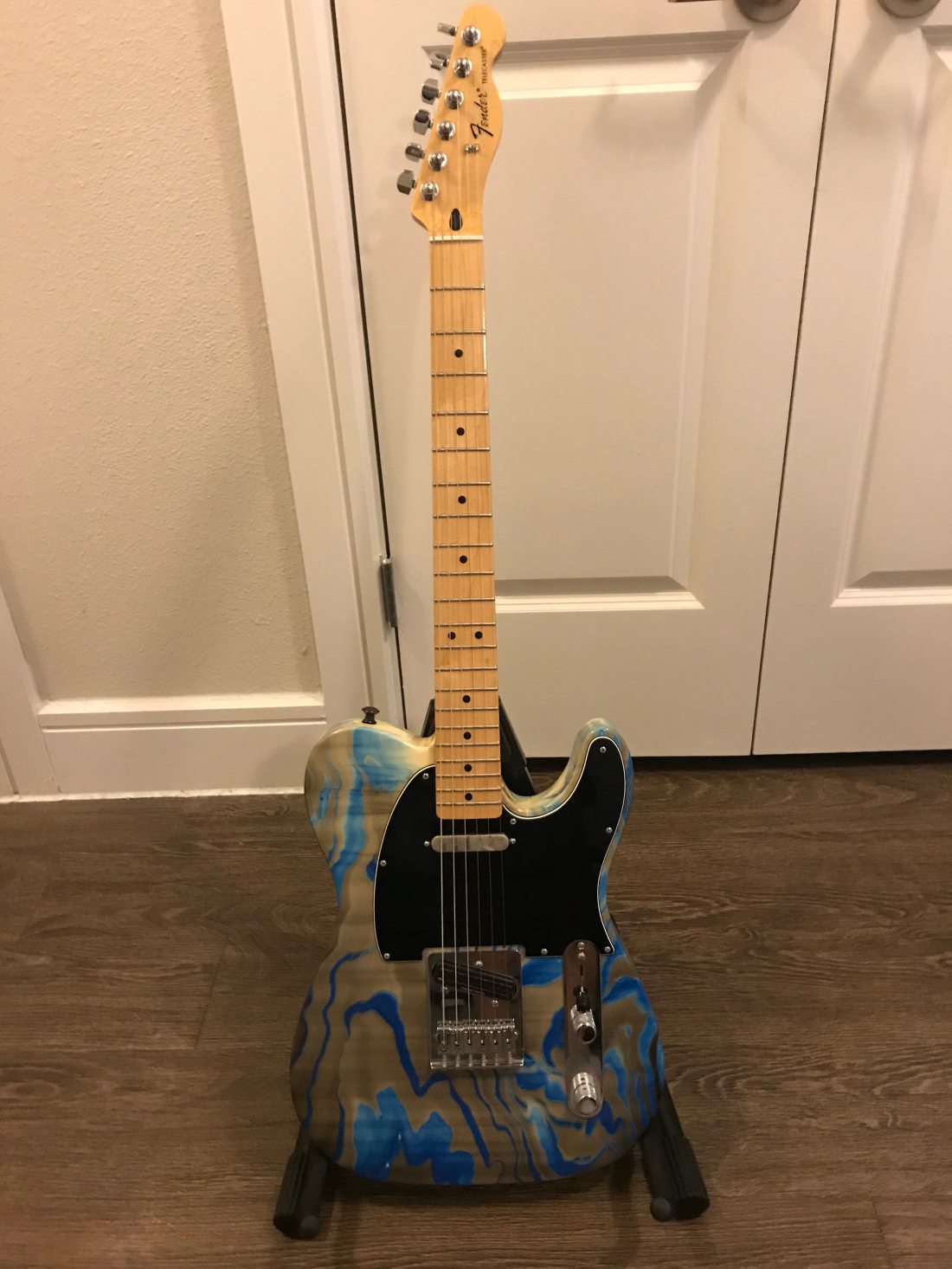 1. Tell me about your guitars.

Fender Telecaster: I use this guitar for songs in standard tuning. It’s got a Seymour Duncan humbucker in the bridge for some extra oomph. 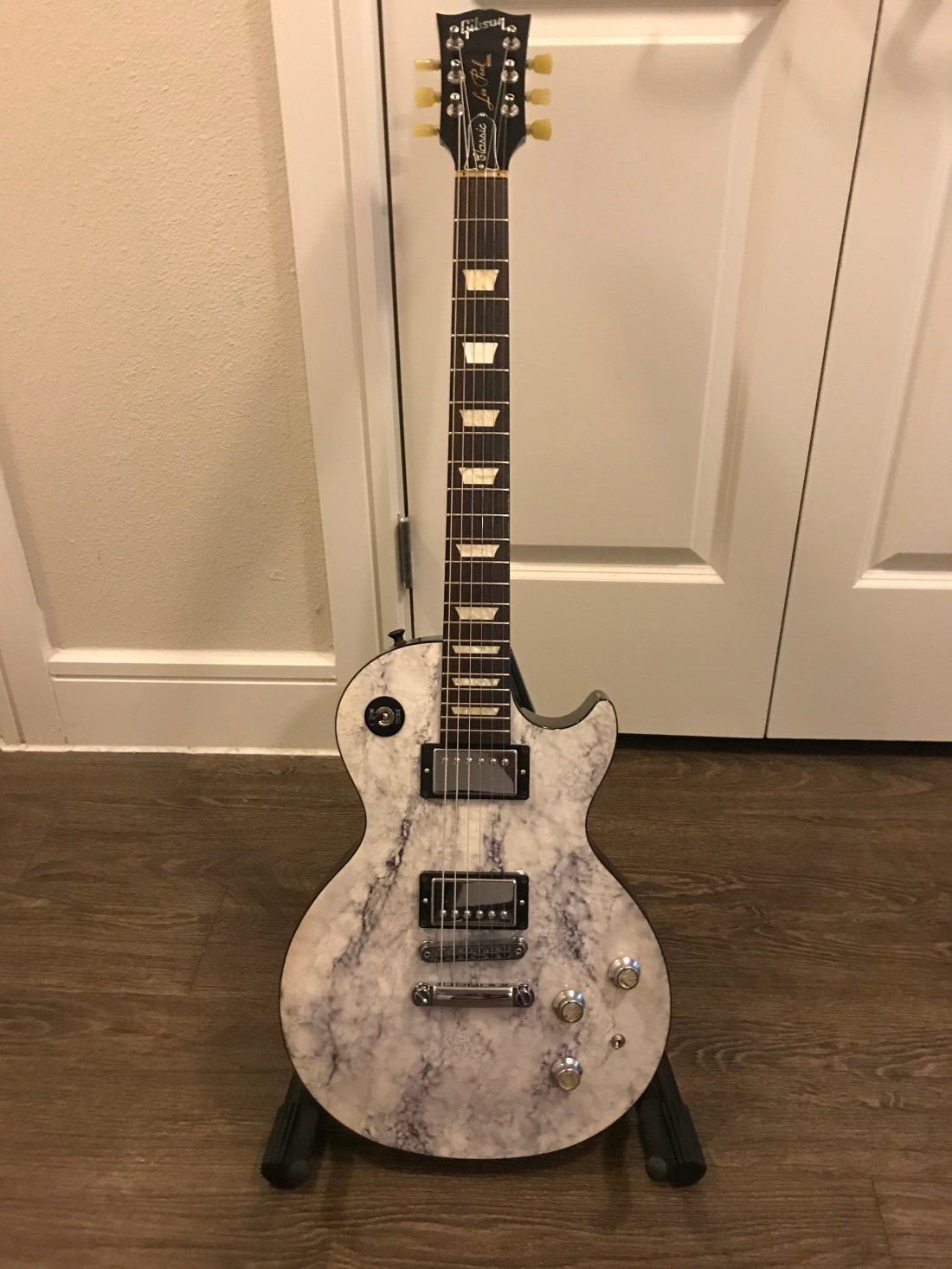 Gibson Les Paul: This guitar is used for songs in Drop C — and also has a secret weapon, a 15dB boost switch.

Moniker Dixie: Custom guitar that I designed with the Moniker Guitars team in Austin, TX. I keep it in Drop C tuning.

2. That Moniker guitar looks killer. How’d you come into possession of that and what separates it most from the Les Paul and Tele that you use?

The Moniker Dixie is a very special guitar because it marks the beginning of my relationship with Moniker Guitars, a company based here in Austin that I endorse. I worked with the team to build the guitar exactly to my specs. I always liked the classic look of the Tele body, but I wanted to beef it up with some Seymour Duncan Distortion pickups. 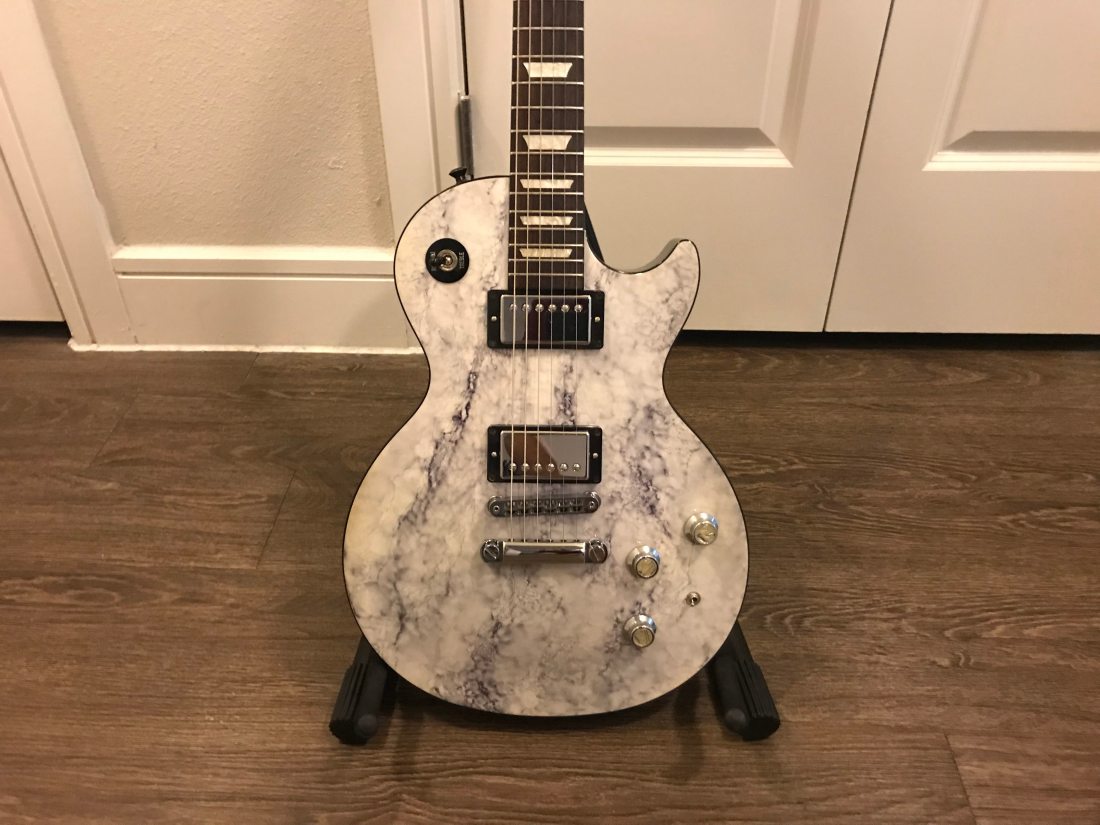 3. Talk to me about these wild guitar finishes on the LP and the Tele! Are they custom?

The finishes were actually put on at the factory, but the interesting thing is that for both guitars, the patterns are unique. I picked up the Les Paul at Sweetwater Gear Fest in Fort Wayne, Indiana. People have come up to me after shows and told me that it looks like everything from blue cheese to fancy bathroom tile. 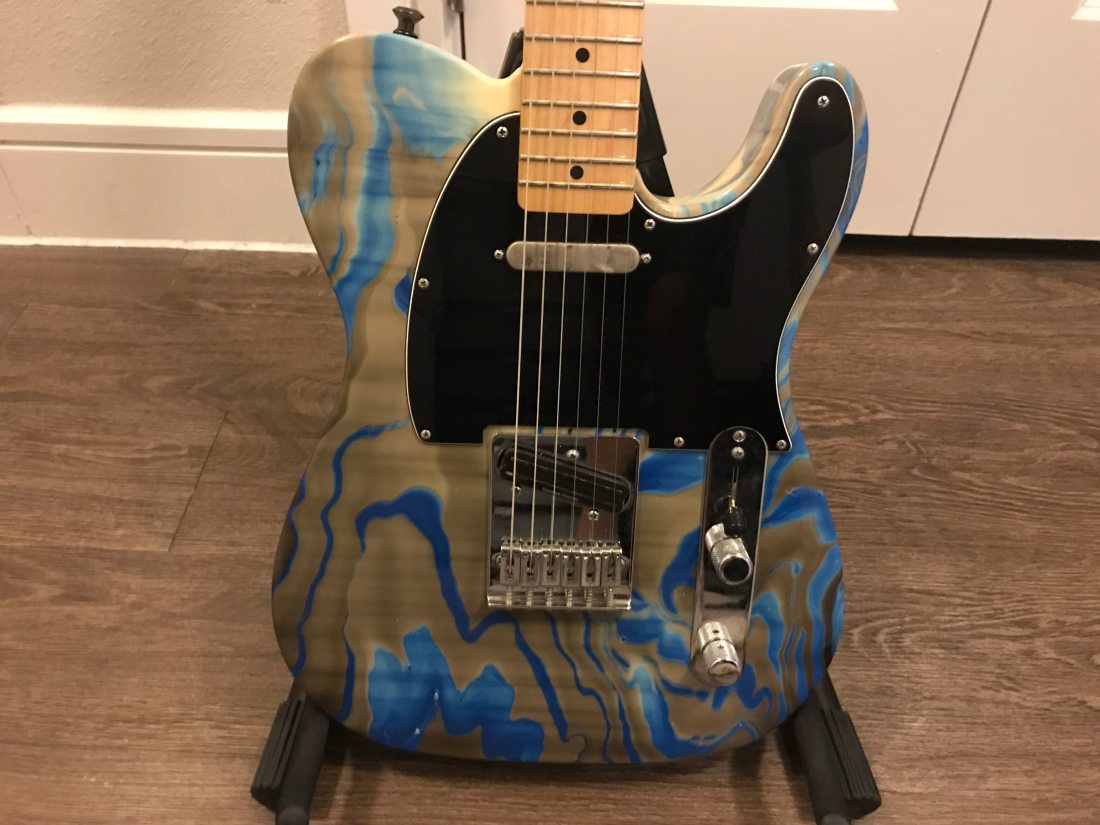 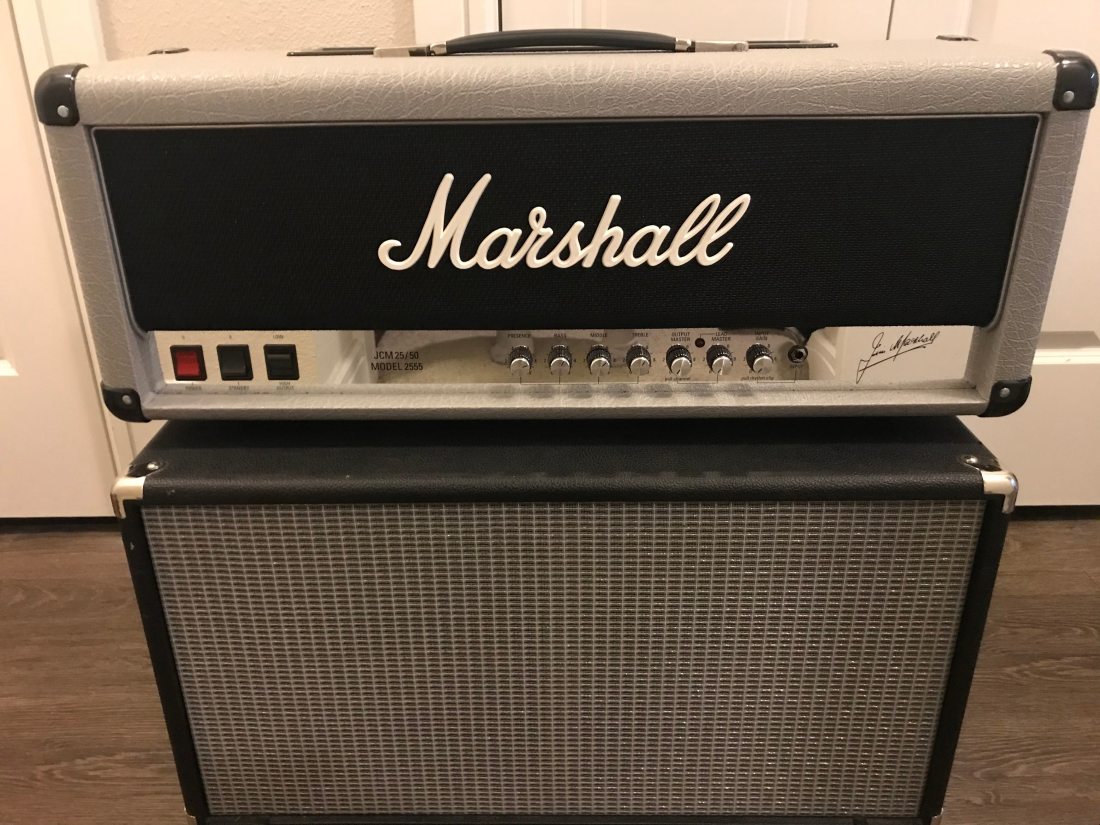 4. I’m drooling over that Jubilee. Is that a reissue? Have you had a chance to compare it to other Marshall amps? I’ve always been curious if they sound much different than a Plexi or a JMP?

I was drawn to Marshall initially because some of my favorite guitarists were always known as Marshall guys — Slash, Tom Morello. I’ve always lusted over Marshall’s Silver Jubilee. The original was released in 1987, but the one I have is a reissue from 2015. It’s a lot like the JCM 800, but with extra gain. It’s got a cutting, mid-range tone that works great for the hard rock sound that Black Heart Saints require. I’m interested in getting a power attenuator so I can really crank it up at club shows. 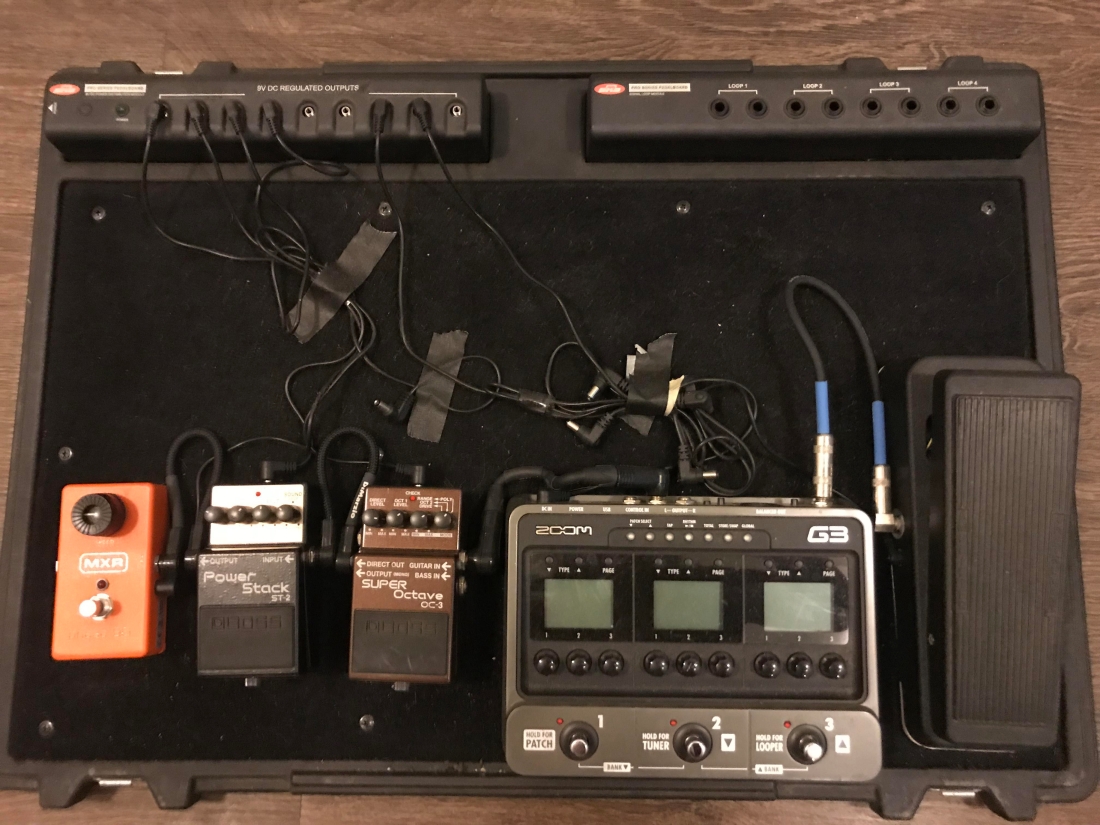 I use the Zoom G3 for three uses: a noise gate, pitch shifter (+1 octave), and a boost. I won it in a contest that Guitar Center sponsored. My band at the time got to open for Slash and Myles Kennedy & The Conspirators, and we also got a badass prize package. I’m very thankful for having the opportunity to open for Slash twice (most recently with Black Heart Saints).

6. If you had to point someone to a song of yours that showcased your sound/style the best, what would it be and why?

A song called “Call to Arms” has been a recent favorite of mine. It came out last year on our album ALIVE. It’s a killer track because it features the catchy riffs that I’ve been known to lean on, but also highlights the groove that I think is missing in hard rock today.

I love my Les Paul, but I have to be honest that I’m not too thrilled with the G-Force tuning mechanism (otherwise known as a robo-tuner). I’ve found that it can be unreliable at times, especially when trying to tune in lower tunings like Drop C.

We have a music video in the works that we’re slated to shoot right after our Winter Tour 2018. Then after that, we plan to get back to the studio to work on some new material. This band is always doing something productive, and I love to stay busy — if we’re not on the road, then we’re either in the studio or working on something special.