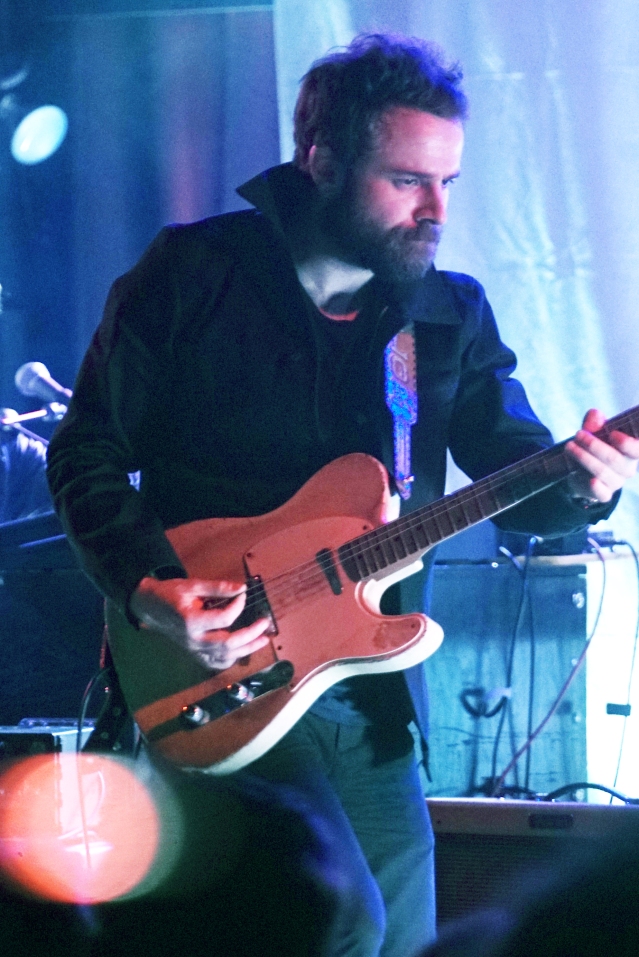 Taylor Goldsmith onstage at the Belly Up on Jan. 10 (photo by Rodrigo Espinosa) 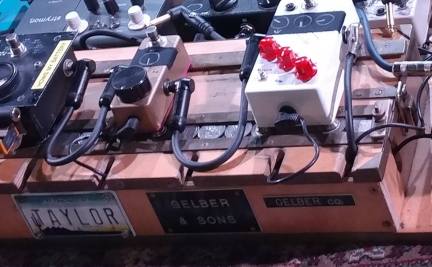 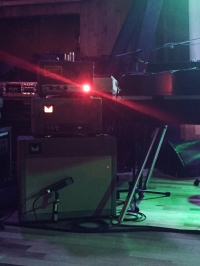 In December, I interviewed Dawes’ vocalist/guitarist/songwriter Taylor Goldsmith for NBC SoundDiego. You can read it here. Below are some excerpts from that same interview that didn’t quite fit the narrative of that writeup, but do seem to fit nicely into the Gear and Loathing fold. Many thanks to Eric James and Rodrigo Espinosa for contributing some of their own photos from the band’s Jan. 10 Belly Up show for this feature. Enjoy.

Dustin Lothspeich: Do you guys typically rehearse much for tours? Seems like you’re a well-oiled machine at this point…

Taylor Goldsmith: I mean, through the years there have been tours we set out for where we wouldn’t get together – but this one’s different because it’s “An Evening With” tour so not only do we have to know 2 1/2 hours of music every night, we have to keep it interesting from night to night. We have to brush up on a lot of old tunes that we haven’t played in a while, so there will be a lot of rehearsing for this one.

DL: I’ve been way into acoustic music lately. Been thinking about picking up a real nice Martin or something.

TG: To me, it’s the most expressive kind of guitar. You can’t pick up an electric and plug it straight through an amp and have it be the perfect sound for a really gentle ballad and a perfect sound for a really loud, angry song – unless you were to turn up the volume or get a bunch of pedals. Whereas with an acoustic, it really can go from the quietest and the gentlest to the loudest and the most aggressive very naturally. People associate it with ballads but it’s actually really expressive.

DL: Do you typically write on acoustic or electric? Or something else?

TG: There are songs I write on piano and then once in a while, I’ll have a riff that I come up with on the electric guitar, like “Things Happen” or “One of Us,” where it wouldn’t have sounded right on acoustic originally, or I wouldn’t have noticed it or thought it was worth paying attention to. But most of the time, most of my songs are written on acoustic.

DL: One of my favorite songs of all time is “Don’t Send Me Away” – how did you write that?

TG: That one was, weirdly enough, written on a piano. And there’s those kinda like “bop-bop-bop” quarter notes that are going throughout while the bass line changes. As you can imagine, it’s a lot simpler and easier on the piano to do that. It took some figuring out how to play it and move the bass part around while keeping those three notes up top. But yea, it was originally written on piano.

DL: The band’s new record mixes a few different types of styles; it’s pretty eclectic. Do you think We’re All Gonna Die is different from your other albums in that regard?

TG: To us, we’ve always done that. I would say that they’re recorded in the same way – songs like “Most People,” or even “When My Time Comes” or “Don’t Send Me Away” even would be right at home on We’re All Gonna Die. I think any of them would be! I think a song like “Quitter,” or “For No Good Reason,” or “Roll With The Punches” would fit on any of our previous albums. I like that each record has a personality but I don’t think any of our records have strayed too far from what we’ve always done.

DL: I think one of your strengths, in particular, is your ability to write about everyday problems and our constant struggle with losing or regaining hope – without being too preachy. That’s a fine line.

TG: I think a lot of us try to get to a place, and I’m a victim of this as much as anyone else, where we get to a place in our lives where we don’t have to suffer. That we can build something around us and we’re never lonely and we’re never depressed and the reality is, that’s not gonna happen. And the only way to deprive that fear of its power is by embracing it and knowing that it’s going to come in strides. And you’re going to have to sit with it and deal with it sometimes but other times, you are going to feel like everything is OK. There’s a great Smog song where Bill Callahan sang something along the lines of: “We all have peace on earth about every other day,” [laughs] and saying it like that kind of no longer allows you to be scared of ever going through the dark times because when they do come along, you can go, “I knew this was going to be part of this equation.” 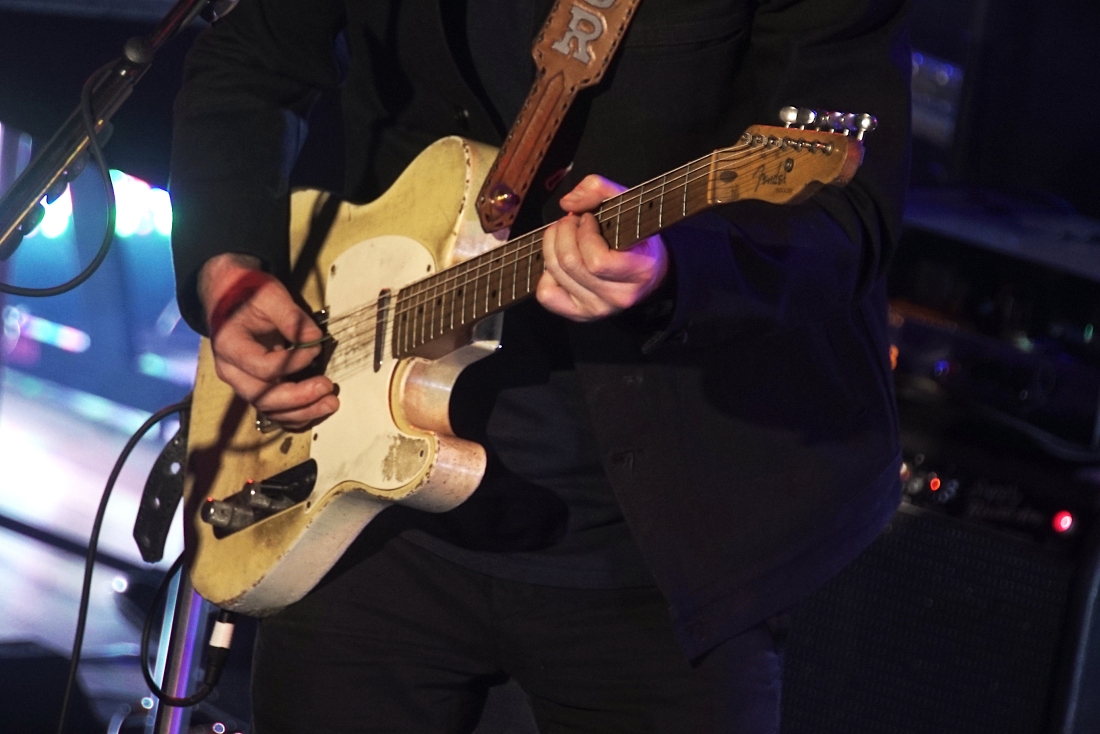 DL: Off the top of your head, what was the record you listened to the most in 2016?

TG: Shoot, that’s a good question. I mean there have been several I’ve been going back to a bunch – my girlfriend kind of gets like, “Why are you listening to the same thing again?” So I don’t  live with one record like I used to as much anymore, but I was going back to Blood & Chocolate a lot by Elvis Costello & The Attractions a lot. Putting it on over and over. I’ve always had that record, but when you first discover Elvis Costello, you’re obsessed with This Year’s Model, or Armed Forces, or My Aim Is True, and then eventually Imperial Bedroom and Get Happy!! and all that. I had Blood & Chocolate and I’d always loved it but I hadn’t had that feeling of I-have-to-only-listen-to-this-for-the-next-week moment the way that I’d had with all the other Elvis Costello records that I’d loved. So I kinda finally had that.

DL: What was the favorite gig you played last year?

TG: It would probably be Nashville’s Live On The Green Festival, where it’s just this pretty outdoor show and we were playing after Kurt Vile, who we love and they’re obviously an impossibly cool band. We thought, “Aw shit, they’re putting us up after Kurt Vile? Everyone’s gonna leave!” And I didn’t go out during Kurt’s set – I mean, I love Kurt’s show and we’ve seen a lot of his shows, but I was kinda backstage the whole time with friends so I didn’t see the audience until we walked onstage and there was like 18,000 people and it was the biggest show we’d ever played – at least in terms of us playing last. I mean, we’ve opened for Mumford And Sons, but we were the opening band – people were there because they had to be. But with this, they didn’t have to be. It was the most surreal experience playing for that many people and really feeling connected to them. I’ve never had such a high after a set than I did that night.

TG: I mean, I guess it’s like equal parts – a good tour (I’m really excited to get on tour and play these shows), but I’m also really excited to get a handle on the next batch of writing. It’s always fun to either be playing new songs or in the studio playing new songs. We never wanna be taking too much time off. That’s kind of how we’ve always been and that’s kinda how we want to keep it. Life is better when we’re working. I’m hoping to have these songs start showing up in a bigger way. I’ve written a couple so far but I’m excited for the new year for that. 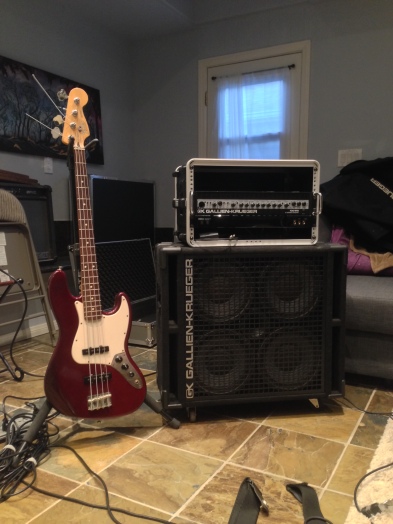 1. Tell me about your current rig – what are your likes and dislikes? I use a Fender Jazz Bass. I’ve got a Gallien Krueger RB 1001 head unit with a Gallien Krueger 4×10 cabinet running through an MXR Bass Compressor, an Electro Harmonix Big Muff overdrive, a Behringer Ultra Shifter/Harmonist, a Boss Super Chorus, and an MXR Bass Envelope Filter. I’ve always been more interested in analog pedals rather than digital and am still playing around with my tone. It’s most definitely still a work in progress as I’m planning on purchasing another 15” cabinet to secure the low end and utilize the 4×10 cabinet for the hi and mid ranges. The Ultra Shifter is a lot of fun to play around with before big drops in our songs, it’s fun to dive bomb and drive the octave down a whole step. There’s a knob to control the speed of the drop so it can be fast or slow and it’s a lot of fun playing with that live. The Envelope Filter has given me a lot of enjoyment, as well as frustration. The decay is extremely sensitive so getting that “perfect” swell is challenging at times. Not sure if that pedal is going to stick around much longer.

2. What AJ Froman song do you feel is the best portrayal of your particular sound/style? “Stranger’s Nod” off our new album, Phoenix Syndrome, has a lot of dynamic to it. I feel our sound shines through in a variety of sections in this tune. Swirling through time-signature changes, to heavy half-time buildups, to faster skate/punk sections, to melodic breakdowns is all very enjoyable and I feel we capture a lot of our diverse sound within all of these sections. In softer ambient sections, I’ll use the chorus pedal and during heavier fast sections, I’ll switch to the overdrive. I especially enjoy the contrast between these two tones.

3. If money was no object, what’s the ‘holy grail’ piece of gear you’d buy? A ’67 Fender Jazz Bass. I like Washburns too, but the Jazz Bass has such a beautiful tone I can’t really get away from it. I’d definitely stick with the GK amps. It’d be nice to have 3 Gallien Krueger 2001 RB amps. One would control the other 2 as slaves and I’d have those running into three 4×10 cabinets and three 1×15 cabinets. That’s what Flea’s been doing for quite some time and I really appreciate his style.

4. Who is the musician you admire the most sound/gear-wise? Omar Rodriguez-Lopez is a musician I’ve admired since high school, when At the Drive-In was still together. He has a massive array of delays, trems, and expression pedals to control real-time rate adjustments and may I say, he’s quite good at it. The groups he’s put together have also influenced my rhythmic playing rather than just the sound and tonality he produces. Overall, he is a huge influence of mine in more ways than one.

5. What do you have coming up that we should know about? We are headlining the Belly Up for our first time on Thursday, March 10th. We just released our new album, Phoenix Syndrome, [listen/buy here] and we have a handful of new music we’re planning on recording very soon.