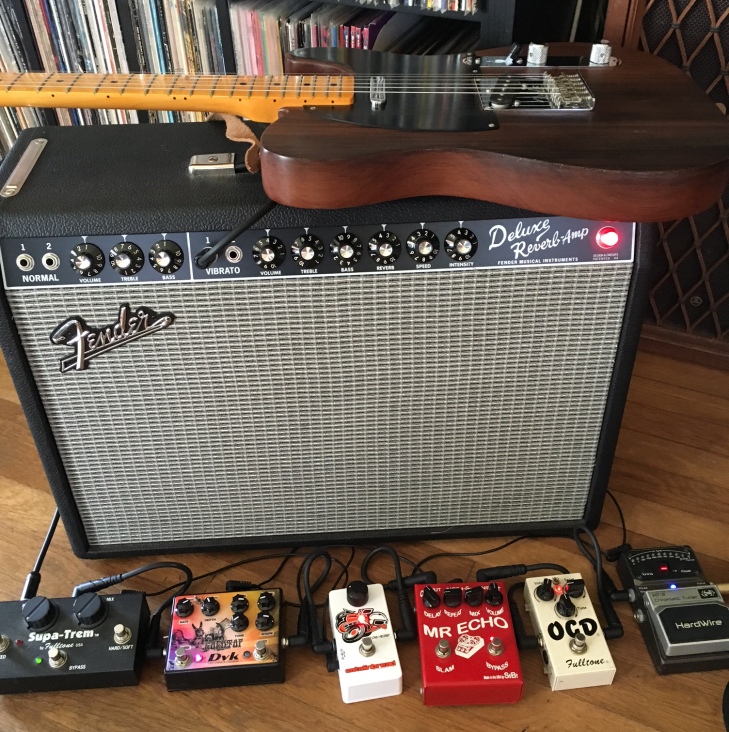 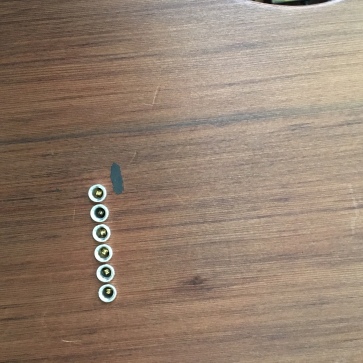 1. Tell me about your current rig: My Fender Old Growth Redwood Tele is my baby, they only made about 200 in 2010. The wood comes from a 100-year-old Nor-Cal railway bridge, so it’s incredibly light (5.6 lbs) and rings like a sominobotch. Deluxe Reverb is just a great transparent clean amp, handles pedals well and really sings when the volume is about halfway up.

Pedal-wise, I use the OCD for just a hint of grit and the Mr. Echo for a dash of slapback. The Super Chili Picoso is a great clean boost, and I friggin’ love the SupaTrem for tremolo…sounds better than most built-in amp trems, with far more versatility. I only occasionally use the DVK Goldtop for a vibe effect. I don’t like to use more than 1 or 2 effects at a time, as it tends to sound too washy. Oh, and I have a weird distaste for pedalboards. They’re just too neat and fixed, like Velcro shoes.

I love my ’69 Vibro Champ for recording, as you can really drive that 8″ speaker; it sounds urgent, punchy and warm. I’ll usually either run my Fender Reverb Tank or original ‘60s Echoplex in front. Even if the delay or verb is low, both really help as tube pre-amps to butter up the tone. And the smell of those old tubes…ahhh.

Nothing else I really want right now, these are my tools.

2. What song of yours do you feel is the best portrayal of your particular sound/style? Probably our song “Bruiser” is the most exemplary guitar tone-wise, it just seems to jump out of the speakers. I also like to overdub a smidge of acoustic for most songs, just for texture, and for that I have a Gibson J-45.

3. If money was no object, what’s the holy grail piece of gear you’d buy?  Hmmm, although I don’t really need another guitar, I’ve been eyeballing those Red Rocket Atomic Tele’s. They’re really well-made customs, have Gretsch Dynosonic pickups and rosewood fretboards. I think that or a similar custom shop Fender would be a good compliment to my current set up. Ideally though, I’d love a soundproof room in my house more than anything. Then I could do all kinds of stupid shit.

4. What was the first piece of gear you bought and what are your thoughts on it now? Probably my first real acquisition was my Marshall JCM 800 head sometime in the late ’80s. I used it exclusively up until a few years ago for rock and roll, and you just can’t get a bad tone out of it. Toured with that thing and wouldn’t trade it for the world, it’s like an old buddy that’s always there when I need it.

5. What do you have coming up that we should know about? Hope to have a second EP out mid-year, and then combine both EPs into a 12″ LP.

Ypsitucky play Soda Bar on Friday, May 13, with The Downs Family and Behind The Wagon. Don’t miss ‘em.