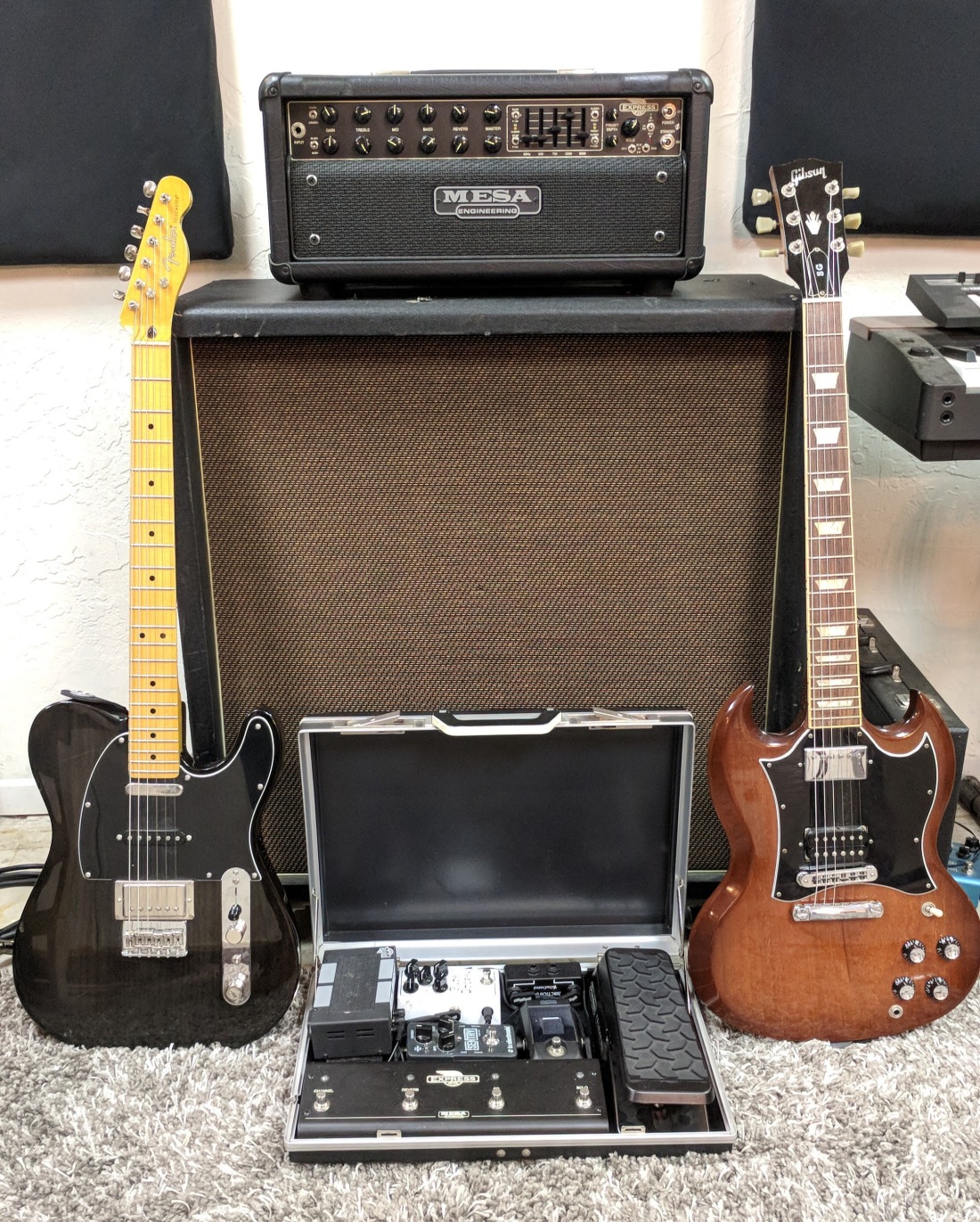 1. Hey Peter, talk me through your live rig: Why is that Mesa amp your No. 1? I’m surprised not to see any modulation or delay/reverb effects on your board. What else would you add if you had the option?

I decided to go with the Mesa 5:25 Express + for live for a few reasons. First and foremost, it just sounds the best for the kinds of heavy (but not too heavy) tones I’m going for, but also because of its flexibility and because it packs a ton of features into a head that will be easy to move around and keep in good shape. It has enough foot-switchable options that I was able to keep my pedalboard simple, which was important to me because for this band I decided I wanted to be able to focus more on playing and having a good time than setting up a complicated rig, and having extra patch cables, etc. to worry about. In addition to switching between a high and low-gain channel, it also lets me have foot-switchable reverb, two foot-switchable EQs per channel (the graphic EQ and the preset EQ knob which is a nice sounding midscoop) and also a foot-switchable boost. All that saves me 3 or 4 pedals on my board, which means I can keep it small in the one briefcase and I don’t have to use the effects loop since everything on the board is in front of the amp so that’s fewer cables to have to set up, trip over, or break.

I didn’t bother with modulation, delay, or pedal reverb on this board because as of right now, the songs we’re playing don’t really call for it. There’s definitely a few spots where I would normally use my Carbon Copy a little bit, but not so much that I wanted to add the complexity or the tap dancing. I could definitely see changing it up and adding the Carbon Copy, Timeline, and Moore modulation pedal in the future if we end up using more effects for our next album. In which case I’d think about finding a smaller volume pedal, tuner, and/or power supply to free up some space. 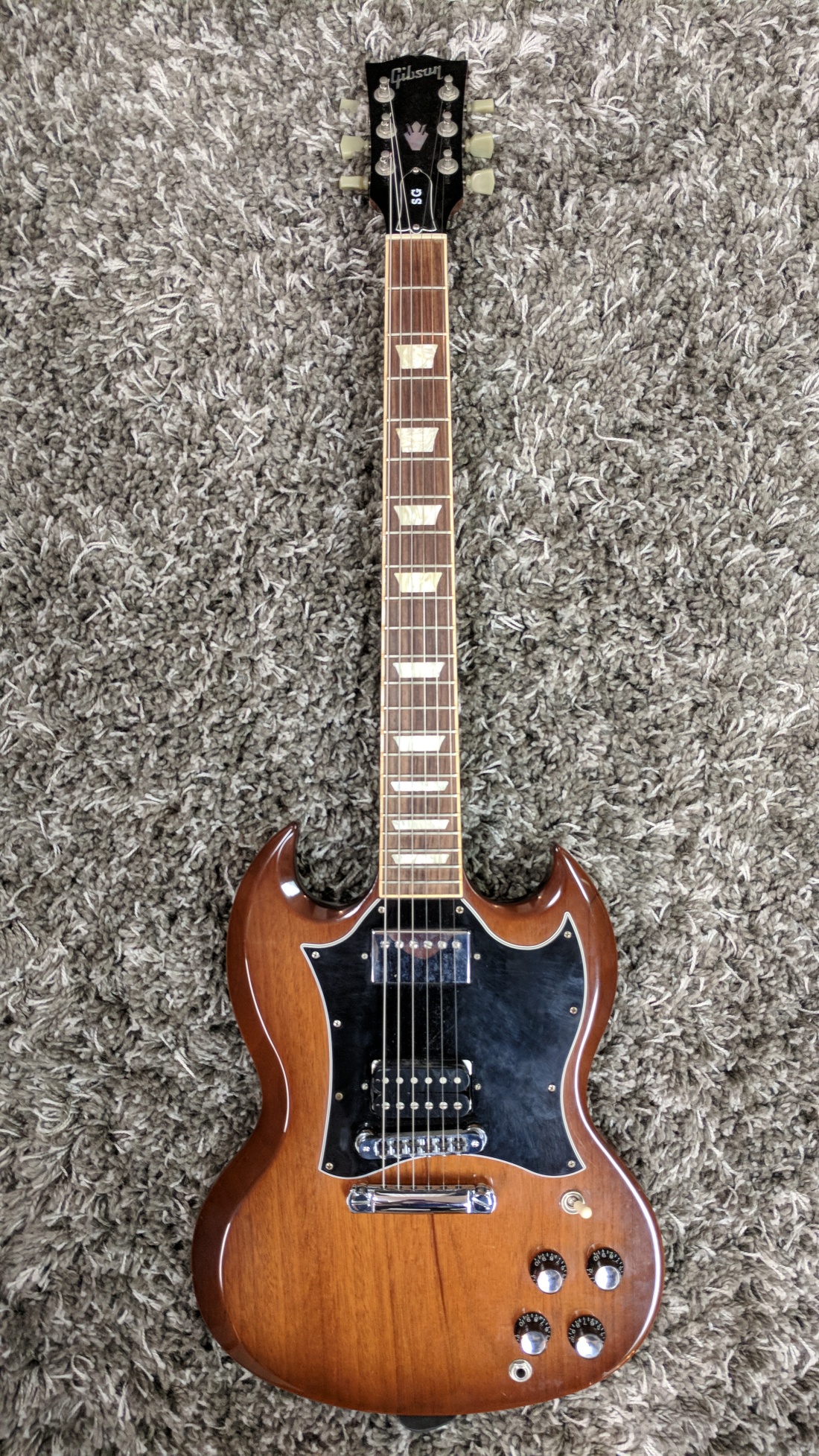 2. How did you settle on both an SG and a Tele?

All our songs right now are in drop D except one in drop C, so I’m using the Tele for the bulk of them and the SG for the one drop C song. Ironically, the Tele is the cheapest guitar I own, but somehow it just feels the best to play; the weight and balance is nice, the neck is fast, and I like the look of it. I swapped out the stock Fender humbucker in the bridge for a Seymour Duncan SH4JB and it sounds great. The SG handles the lower tuning the best out of all my guitars and it’s my second favorite, so it was an obvious choice. 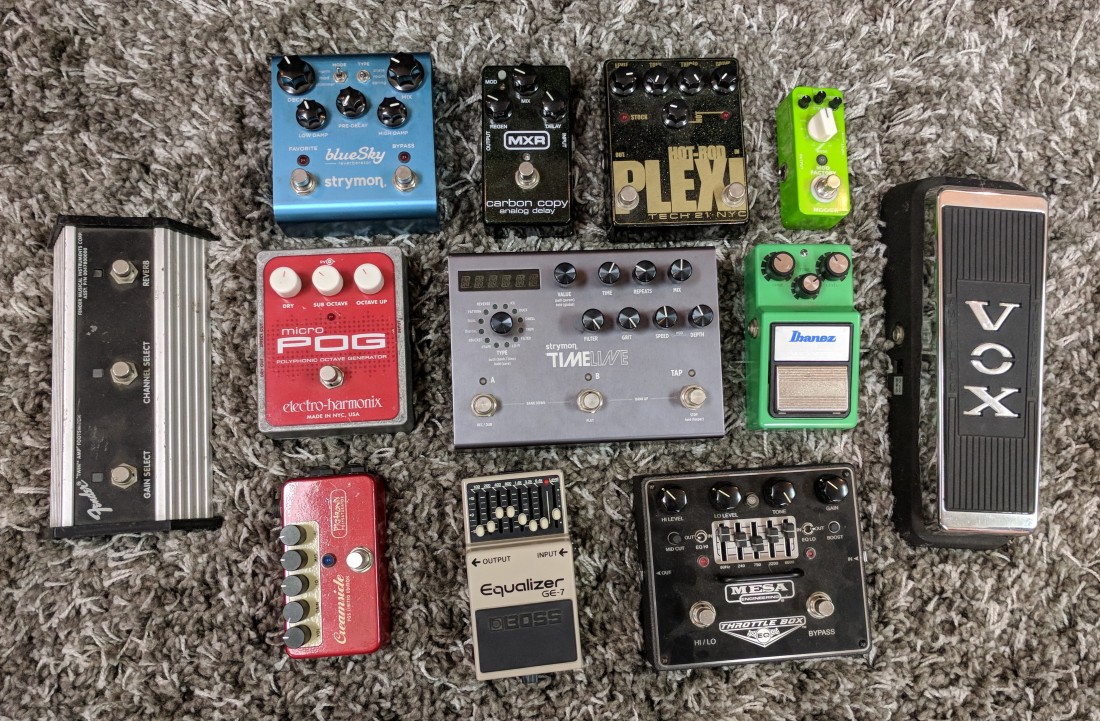 3. Out of all the effects you used on the record, which one got the most use and why? Were there any other effects you wish you had on-hand that you would’ve used?

The other pedals that got used the most on the record were the Tube Screamer and EQ. They were on pretty much the whole time, pushing our other guitar player’s amp a bit more for one of the main guitar tracks. I think I used a little Carbon Copy and reverb from the Strymon Blue Sky here and there, but for the most part, our guitar tones are pretty much straight-forward gain.

4. Talk to me about the extra amps in this pic…what’d you use ’em for?

The other amps are a 1964 Ampeg Jet J-12, Peavey 6505 Mini Head, and Fender ’94 Twin (not to be confused with a Twin Reverb, this one has two drives that are actually pretty cool). I was planning on using the Peavey for the main guitar doubles, but our other guitar player’s Peavey XXX won out. I actually used the Fender for all the leads since its drive has a nice mid-range bite that compliments the mid-scooped Mesa and Peavey well. The Ampeg unfortunately didn’t make it onto the EP since I mainly use it for cleans or light bluesy drive, but it gets used in the studio all the time.

5. You guys have a new EP coming out — how did the recording process go? Who did you work with and where did you record it?

In addition to playing in the band, I’m actually a full-time professional engineer, so I recorded most of it at my studio: The Grey Brick Recording Studio. Two of the songs were recorded up at Catacomb in Orange County last year before I joined the band, but we ended up making some changes to those songs so the only part of those recordings we really kept was the drums; everything else for the five songs I recorded, mixed, and mastered.

6. If you got to buy ANY piece of gear for one of your band mates, what would it be and why?

7. Besides the EP release show at SOMA on Friday, December 1st, what else does Hard to Hit have coming up?

The release is definitely the biggest news, it’s been almost a year since Hard to Hit has played because of some changes to the lineup and we decided to just focus on the EP before getting back out on stage, so this will actually be the first show back with the new lineup. We will also be releasing a video the same day. The following weekend, we will be doing a short run up to Bakersfield, Grover Beach, and one other city that’s still TBD. We will have another local show in February and we’re planning on a bigger West Coast tour for March.

1. In one word, describe your sound.
Heavy-handed (the hyphen makes it one word, right?)

2. Tell me about the stuff in your photos: brands/models, etc. What do you use live – and what do you keep at home? Is there anything you’re not stoked on that you might be replacing soon? Anything that will always be a fixture in your rig?

What I got goin’ on here is a late ’70s 50w Marshall JMP, Peavey VTM 120, early ‘00s Gibson Les Paul Studio with a Railhammer in the bridge and Burstbucker in the neck, Reverend Roundhouse 290, which they no longer make, an old Mesa 4×12 and a Lone Wolf Plague Rat. I’ve used both heads live, but right now the VTM is my go-to because it’s just a tank and if I’m feeling lazy, it has enough gain on tap that I can leave overdrive pedals at home. If I do bring a pedal, it’s normally the Plague Rat, which is a modified boutique take on the venerable Proco Rat, with diode switching and some cool lo/hi cut features. I’ve been bored with the standard Tube Screamer-into-Marshall thing, so I started looking for something else to fill that spot and the Plague Rat does that in an awesome way. Sounds like pure chaos, which I dig. One piece that I’ll always play is my Reverend Roundhouse. I’ve had that guitar for close to 10 years, and it feels like a natural extension of me at this point. I traded it for an Ampeg V4 a few years back and instantly regretted it, but I was fortunately able to get it back. Reverend has been very kind to me and I’ve been endorsed by them for quite awhile now. I also have the Bob Balch signature at home; I’ve just been scared to play it out as to avoid any damage. Great company, great instruments. The Mesa may have to go soon. It’s treated me well, but Satellite Amplifiers make an amazing 4×12 that just about blows away anything else I’ve ever used.

3. Is this stuff you record with, or do you generally record with other gear? When you hit the studio: what’s your go-to equipment guitar-wise?

For recording, I tend to switch it up every time to varying degrees; I get bored easily. I will pretty much always use my Reverend and Les Paul because I’m familiar with them and they stay in our tuning really well. With amps, it’s always changing based on what new cabs or heads are around. For better or for worse, I love to experiment and with GRVR, I have the ability to fully explore any ideas that may come. For instance, one session had the VTM into a 2×12 and V4 into a 2×15. The next was VTM and Marshall into Mesa. I’ve been favoring fewer speakers in the studio as to not have a wall of sound with a 4×12.

4. If you had to point someone to a song of yours that showcased your sound/style the best, what would it be?

We have a new EP coming out titled VOL I, and I’m really happy with the guitars on that. But since that isn’t out yet, the track “Serpent Song” off our 3-way split with VYGR and At Our Heels is a good example. I always try to find the happy spot between heavy/gainy and clarity because we play in a really low tuning but will also do chordal stuff that can get lost in too much gain. “Serpent Song” shows both sides, vacillating from heavy down-picked rhythm to more “delicate” chords.

5. If money was no object, what is the one “holy grail” piece of gear you’d get?

If money was no object, I would buy a Dumble amp just to video myself pushing it off a balcony.

7. Dream gig: What bands would you ask to play your all-time raddest show, and where would you play?

Hour of the Wolf / Earth / Black Sabbath / Mammoth Grinder at Soda Bar. Two of these bands (HOTW & MG) are semi-active, but they’re two of the best and most enjoyable bands to see live, so I had to add them. Earth and Sabbath should be obvious. Add them all together at the best music venue in San Diego and the night would be pure-as-the-fallen-snowblind magic. I’d like to add that GRVR wouldn’t play this show. We would want to kick back and enjoy.

8. What’s coming up for Griever?

We’re releasing the first of four EPs July 1st at the Soda Bar. It’s us experimenting with the changes in how music is released, bought, and listened to in the present day. With genres like EDM (or whatever) and hip-hop, it seems like the artists are releasing stuff so fast that it makes the punk/metal/hardcore/rock way of releasing full lengths every 1.5-2 years seem like fine art. So we’re going to go for quicker small bursts for awhile and see how it goes. VOL I has two originals and a cover, as they all will, and VOL II will be out by our West Coast tour, August 10-20. After all 4 are out, we’ll take the songs we like from the series along with new ones out on a proper LP. So get in on the ground floor at Soda Bar, Friday, 7/1.