1. Take me through your rig: What do you primarily play during shows? Do you bring all this stuff out or pair it down?

Yes, all the gear is set up for shows — well, except for the baby grand. My brother’s first go-to instrument when he was younger was the piano and he played a lot of classical music like Beethoven and Chopin. Its great for making arrangements. You can create bass, rhythm, and lead and to think that composers created whole symphonies on this. Although its an amazing instrument, it doesn’t make it out to the shows.

2. Talk to me about your synths! Why do you have those two in particular? Which do you find yourself gravitating toward playing more?

I have been a fan of Korg synths. They are pretty affordable and you get a lot of bang for your buck. They are also small enough to fit in tight places. We are mostly guitar-driven so the idea of having a small synth that can do the trick is appealing. The Microkorg does create a wide variety of sounds and I could see how it gets usage by a lot of popular bands like The Killers and Yeah Yeah Yeahs. You can get pretty big sounds out of this little box with black and white keys and create and store patches easily. Plus, there are some cool presets already. I wouldn’t recommend it if you are going for a good electric piano or piano sound, but we have songs like “Instant Radio” and “Broken Love,” where Wes [BMPV’s other guitarist] plays these really cool wicked organ sounds for parts at a time. The MS-20 Mini is quite different to the Microkorg. It’s a monophonic all-analog synth. I like listening to some of the music that came out of the ‘80s new wave era, where analog synths were widely used. I think the MS-20 Mini does a pretty good job at creating those sounds and can get pretty deep bass. It does seem like there is a resurgence of analog synthesizers and some companies have been reviving old and creating new analog gear. Out of the two synths, I would prefer the Microkorg because you can get a wide variety of sounds and they can be a lotta fun. 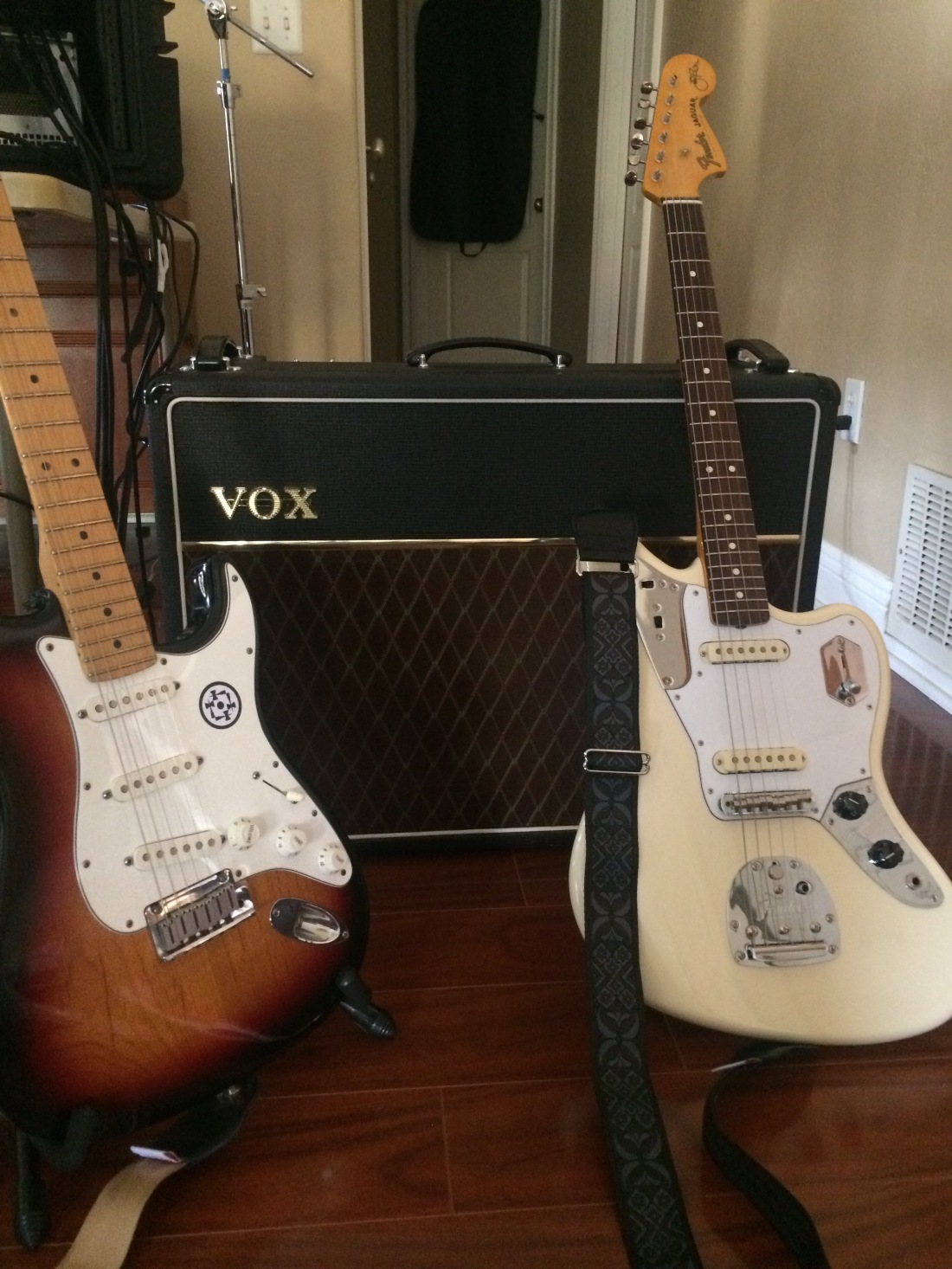 3. Which model Vox is that? And is that a Johnny Marr Jaguar? What do you like most about it? Did anything inspire you to pick those up?

This particular model is the Vox AC30 TB which I believe stands for top boost. I’m not sure if they make these anymore but these have the Blue Celestions, which make a nice warm tone with a healthy mid-range. I have owned Fender tube amps which I really like a lot, you can’t really go wrong with some of the Fender classics or reissues. Wes plays out of a Fender Twin Reverb and it sounds great for recording and live. I just found for me that the AC30 was warmer and could capture some of the lower ranges a little better. Yes, the Jaguar is the Johnny Marr signature model. I spent a lot of time at the guitar shop playing around with different guitars. I found that this guitar felt good and was a good match. It is versatile and, for me, had a creative feel to it which is important when writing music. It has two single-coil pickups but a setting where you can combine them to have a humbucker effect. It also has some boost and treble switches on it, which is really nice. Johnny Marr is one of the pioneers and arguably one of those musicians who started “indie-rock.” I listen to a lot of The Smiths. It was pretty much the album “The Queen is Dead” which made me say, “I have got to learn how to play the guitar.” He created some great music throughout the decades and I’ve kept up with a lot of his music. So in that case, it was hard not to pass up on a guitar that was designed by Johnny Marr.

4. Very impressive pedalboard! I’ve got an old big box Memory Man too and I’ll never sell it. Do you notice a big difference between the tone/feel of the Boss delay and the DMM? Do you prefer one to the other?

Nice, I agree with you — not for sale. It could be one of those that you regret later. The Memory Man and DD7 are both delay pedals that can do similar things but have their differences. The Memory Man has a warmer and organic sound. The Boss DD7 has a brighter sound to it and seems to respond quicker. I like to use them both but regularly use the Memory Man and then use the DD7 for certain effects for parts of songs for the effects. It can create some psychedelic sounds with the reverse delay too. Although I feel that they combine well together and if I had to choose one, I would probably go with the Memory Man.

5. If there was one piece of gear you could buy yourself (and money was no issue), what would you get?

6. What does Be Mine Phantom Valentine got going on right now?

We are currently creating new music that we are really excited about! And just started shooting some videos. They should go up soon on our sites. We also finished enough songs to look into recording our music, so definitely stay tuned!