1) Tell me about the stuff in these photos: Are you using all this stuff live, or is this for recording too? Is there anything you might be replacing, or adding soon? Anything that will always be a fixture in your rig?

My main guitar that I’m using is a white Fender Hendrix Stratocaster made in Mexico.  And I run that into a Vox AC30 and run the preamp section into a Marshall 4×12″ cabinet (depending on the size of the show). 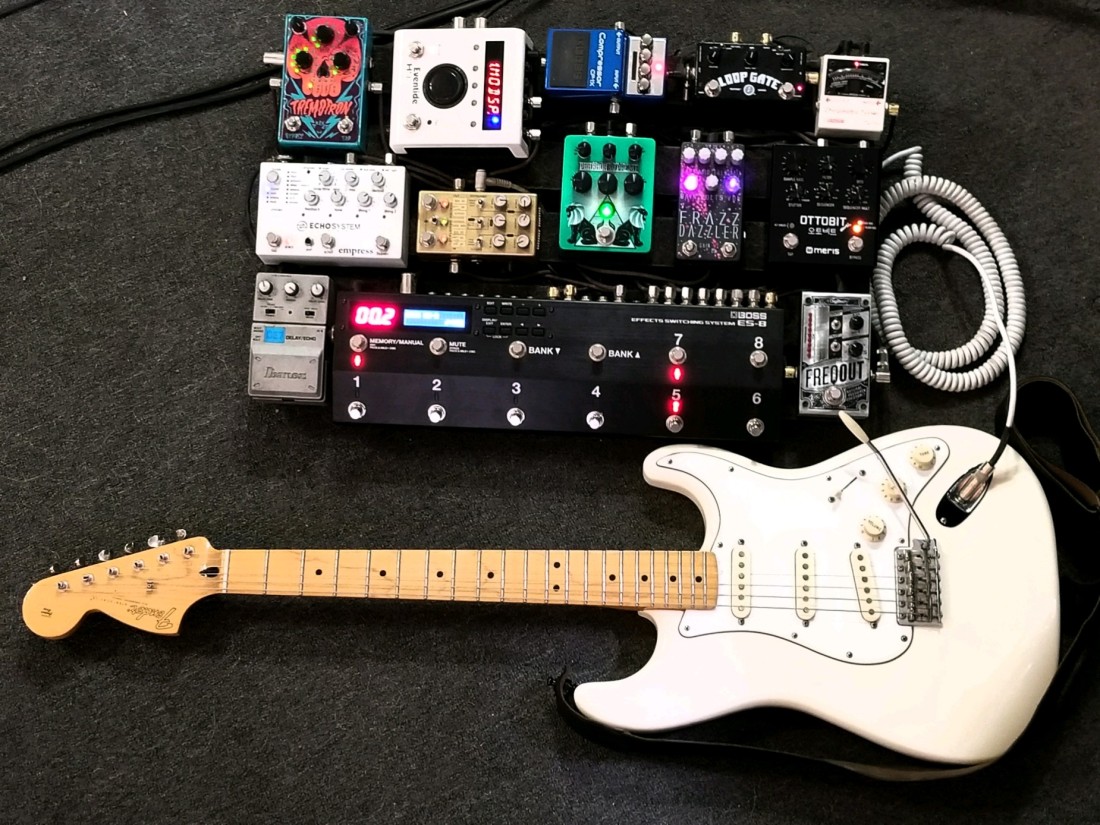 I’m always trying out new gear and new stuff that comes out. So while this is my board that I’ve used for recording and I’m using live, there’s some stuff that will probably change, yeah. I haven’t really been using the Z-Vex Loop Gate all that much so I might stick something else on there. I’ve been really interested in Rainger Effects’ new reverb or throwing my Deep Space Pulsar pedal on my board and use it for my synths. If there was one fixture on my board I’d probably say it’s the H9 just because it can do multiple effects in one algorithm. I’m pretty happy with it but one day I might just redo everything and not keep anything from this board’s build, I don’t know… 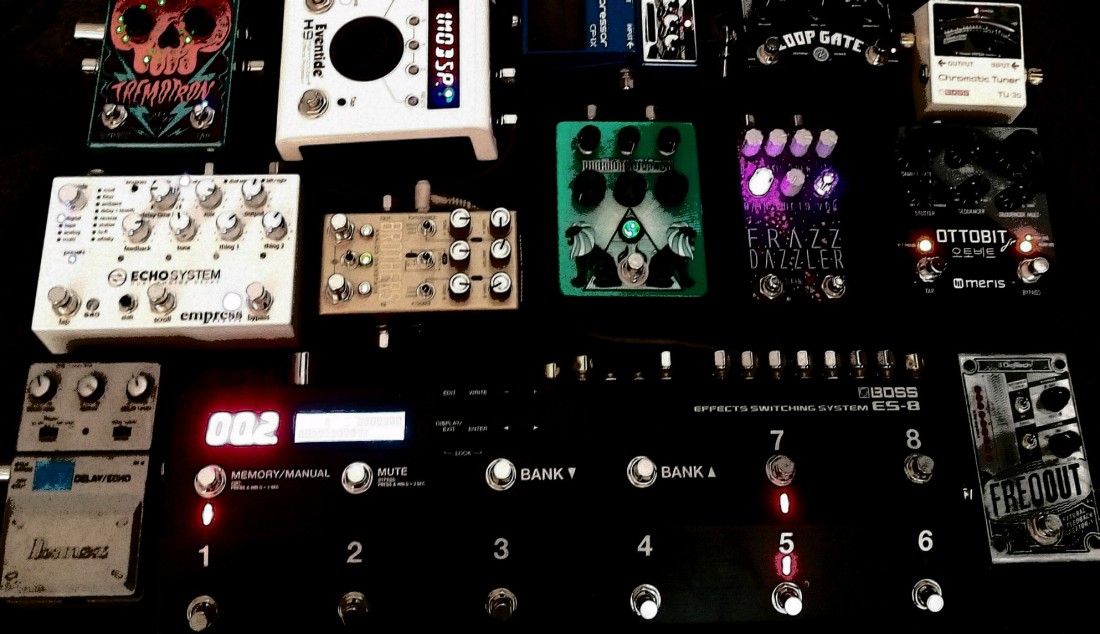 2) Your pedalboard is fucking insanity. What are a couple of your particular favorite pedals that you can’t do without – and explain why? Do ever wish you had a smaller board? Do you think you’ll ever put a smaller, separate board together?

If I had to pick my favorites at the moment, it would probably be the Empress Echosystem and the Digitech Freqout. The Echosystem is a delay machine. It’s got a bunch of different kinds of delays. It’s probably my go-to pedal when I’m just jamming because it’s one of those pedals that is very easy to use and I’m always finding new sounds that can come out of it. I think it could be nice to have a smaller board. I’ve never been able to actually do it though. I’ve always had about this size of a board. I used to have a board that was just ridiculous! (hahaha!) It was probably 2 1/2 times the size in length and was double-tiered in the back row. But I mean, the shit was ridiculous to gig with as you could probably imagine. If I did go smaller, I would just use my H9, Echosystem, and Chase Bliss Brothers or BAT Pharoah……if I had to.

3) Talk to me about that H9 pedal — I don’t know much about them except that you can program a bunch of different pedals/sounds into it right? What do you use yours for?

It’s an everything box of effects. It can only run one algorithm at a time, but some of the algorithms contain multiple effects within one algorithm. I mostly use it for big reverbs, big walls of sound, modulation, and pitch shifting. There’s even a song I use it to make my guitar sound like a bass in a part of the song. I definitely will be digging deeper into this guy on our new material we’re writing.

4) How do you like that Hendrix Strat? I’ve never been able to bond with a Strat (I’m more of a Gibson guy). What drew you to that guitar?

I bought it slightly used for pretty cheap. No problems with it really. I first learned guitar on a Strat and then went to a Gibson Les Paul, that I still own. I like both, really. Strats are prone to a lot of noise issues and tuning problems but I just like the tone of the guitar especially with the reverse bridge pickup and the feel of the guitar. But like I said, I might want to change it up for a while and rock something else for a bit.

5) Talk to me about that Organelle? It’s some type of synth or sampler, right? What do you use it for and what do you like most about it?

Yeah, it’s an Organelle. It’s such a deep piece of gear. Technically, it can pretty much do anything if programmed. I’m pretty sure it’s like a Linux computer that runs “pure data,” which is a computer language used to make algorithms for like a synth, a sampler, an effects engine, a lighting controller, whatever you want it to do. I’m not super knowledgeable about how to build pure data patches but there’s a huge community that do that share these patches. Anyways, I love it! I use it as a secondary instrument usually, and that’s why it’s awesome: you’re not limited to one instrument or one specific type of synthesis. 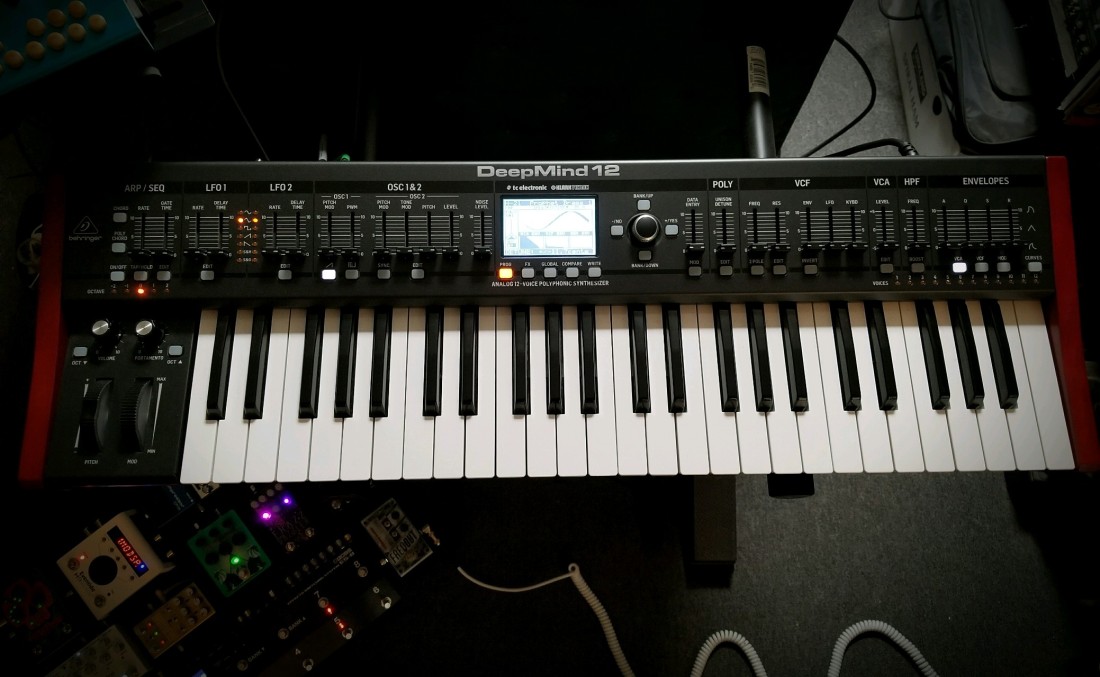 6) I’ve gotta ask about the Deep Mind: Have you played any of the synths that are similar to it? What are some pros and cons (if any) about it? If you had a bunch of money to blow on a new synth — what would you get?

Not many, no. I still have a lot to learn on this front. Coming from guitar, and the world of effects, and venturing into making electronic music, I became interested in synths and started getting into this type of sound design, even though I wish I was a better player. There’s a lot to like about the Deep Mind honestly.  The price, the voice count, the effects the semi-modular design. To me, it sits really nicely in a dense mix, and isn’t overbearing, especially when Matt, our synth player, has a Korg Minilogue and I think it sounds most similar to vintage Roland synths but it truly is a chameleon. I was surprised at how good you can make the thing sound for the price. I think it is super underrated.  Especially when you consider I’ve gotten tones that sound amazing that emulate vintage synths without even using the effects engine section or modulation matrix at all! If there is one con, I’d say that I wish it was multi-timbral out of the box without having to polychain it to another DeepMind, but that’s what I use the Organelle for usually.
Hmmm…That’s a tough one. There’s so many cool older synths I would love to mess around with and there’s always new stuff coming out.  But if money was no issue and neither was space, I’d love to get my hands on a Waldorf Quantum or Arturia’s Matrixbrute.

I used to have a Line 6 Uber Metal pedal that was pretty bad. It was just too overbearing and it was really hard to find a place where it didn’t stick out in a bad way.  The most disappointing piece of gear I’ve had was when I was in a guitar-synth phase and I had a Roland GR20 and GR33. I could never get used to the feel of it. As much as I wanted it to sound good — and don’t get me wrong it was cool sometimes — it wouldn’t track very well and it would always happen at the worst times (hahahaha)! Other than that, over the years, there hasn’t been too many pieces of gear that I didn’t like. I’ve usually let go of stuff because they were either too one note, or my musical interests had changed.

8) What’s coming up for Future Human?

I’m super excited to announce we will be entering the studio very soon to begin work on our debut EP! We also have a rad show coming up at The Merrow on Tuesday, June 5th (get info here) with Blacks Beach Boys and The Gorgeous Boyscouts — big thanks to you and 91X’s Tim Pyles for putting the show together!