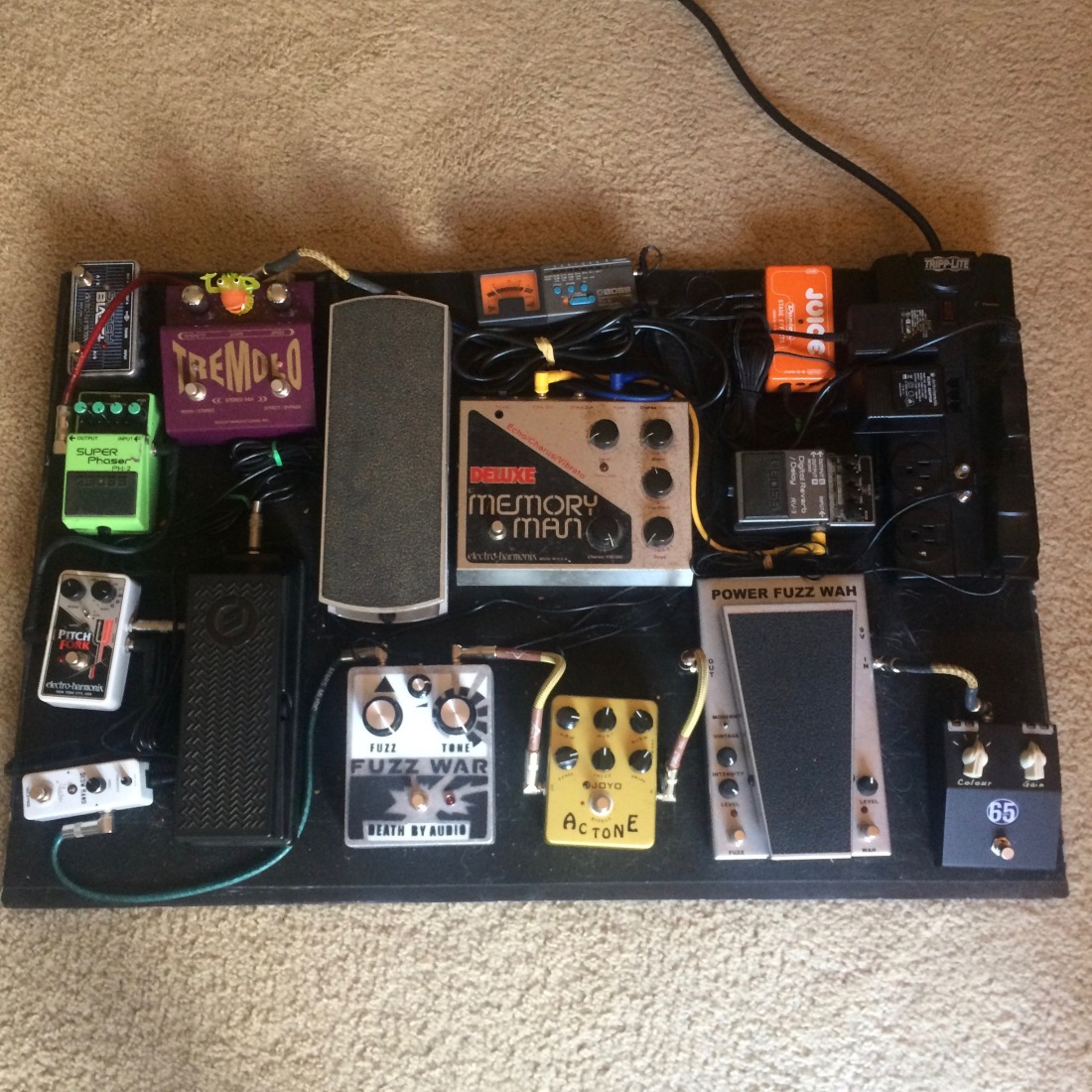 1. Take me through your rig: You’ve got some really cool stuff – how’d you end up using what you do?

I’ve accumulated a lot of equipment, and a lot of junk, over the past 25 years! Some of my pedals were recommended by the other guitar player in my old band (El Gato) from Denton/Dallas, TX. We started in the mid-‘90s, so there were no internet reviews or YouTube demos. His guitar always sounded better than mine, so I just took his word for it on a lot of stuff. These days, I do some research online and peek at other people’s gear if I think their guitar sounds good.

2. How did you end up with that Jaguar? What model is that? And give me the backstory on the Texas sticker…

I got that Jaguar new at a guitar show in Dallas back in the mid-’90s. It was made in 1994-95 in Japan. I recently put some Curtis Novak pickups in it, which I like way better than the stock pickups. I also got a modified Mustang bridge which has solved the problem of strings jumping into the wrong groove on the saddles when I play hard.

Aside from being from Texas, the flag sticker idea was inspired by (or stolen from!) one of my favorite guitar players, Chris “Frenchie” Smith, of the Austin band Sixteen Deluxe. He plays at high volume with a reckless enthusiasm that I love. He has an American flag sticker in that spot on his Jazzmaster, so I guess I put that Texas flag sticker on my guitar as a constant reminder that it is more important to play fearlessly and expressively than to be timid and technically “perfect.” 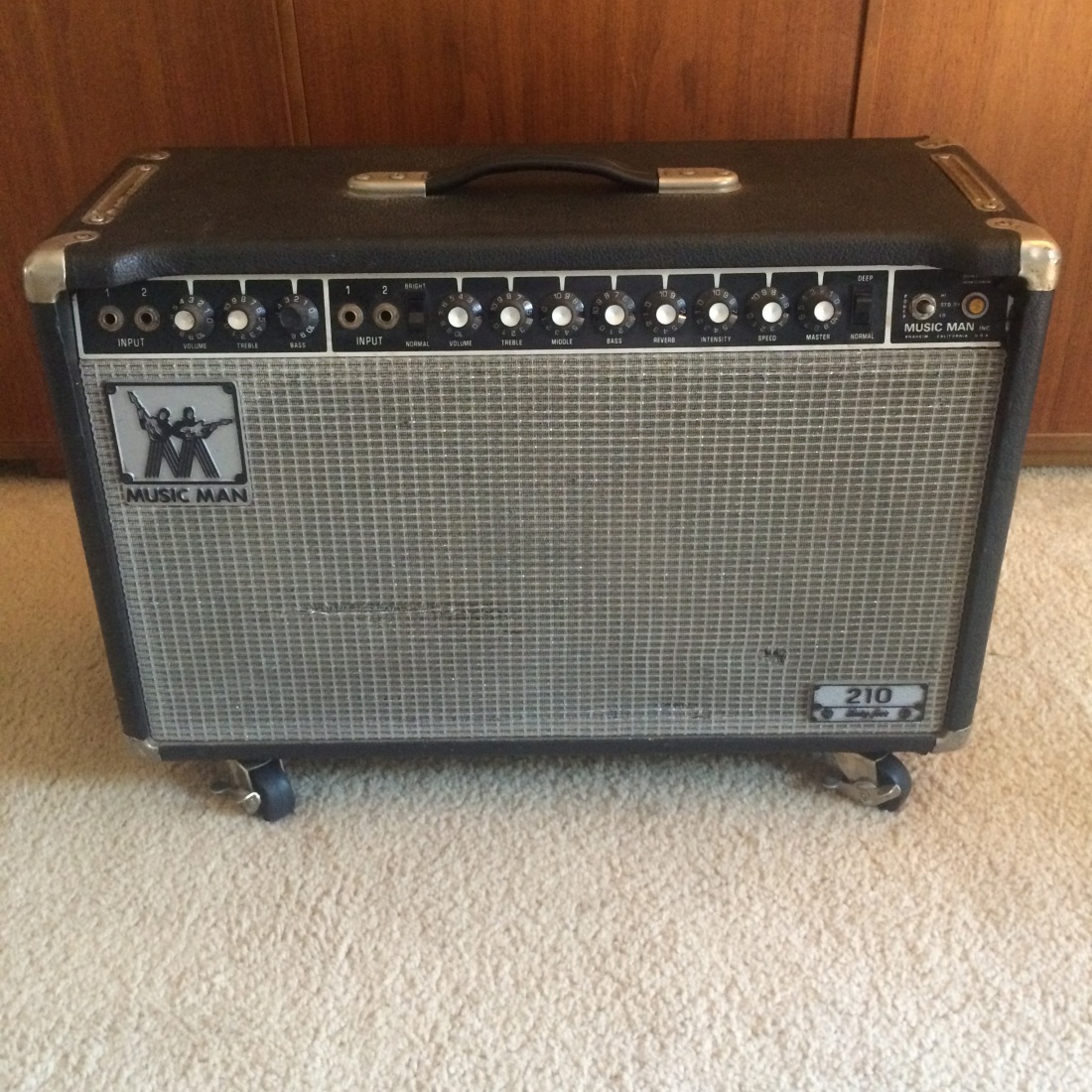 3. I used to have Musicman head that I loved, so I’m way into that combo you have. What drew you to the Sixty-Five?

I really love my Musicman 210 Sixty-Five. I played a Vox AC30 for a long time, and I do still have it. My Vox is from 1985, and it has a darker sound than a lot of the more desirable AC30s. Recently, I started wanting an amp that would give me more of a twang sound, and I was researching Fender Twins. A lot of people were recommending vintage Musicman amps as a less expensive alternative. I found this one on craigslist for $400, and jumped on it. I’m super happy with it, and I’ve pretty much been using the Musicman live, but I use both amps for recording.

4. Love your pedalboard: What’s the one effect you use the most?

The effect I use the most is probably my Death By Audio Fuzz War. It’s my favorite distortion pedal that I have ever owned. 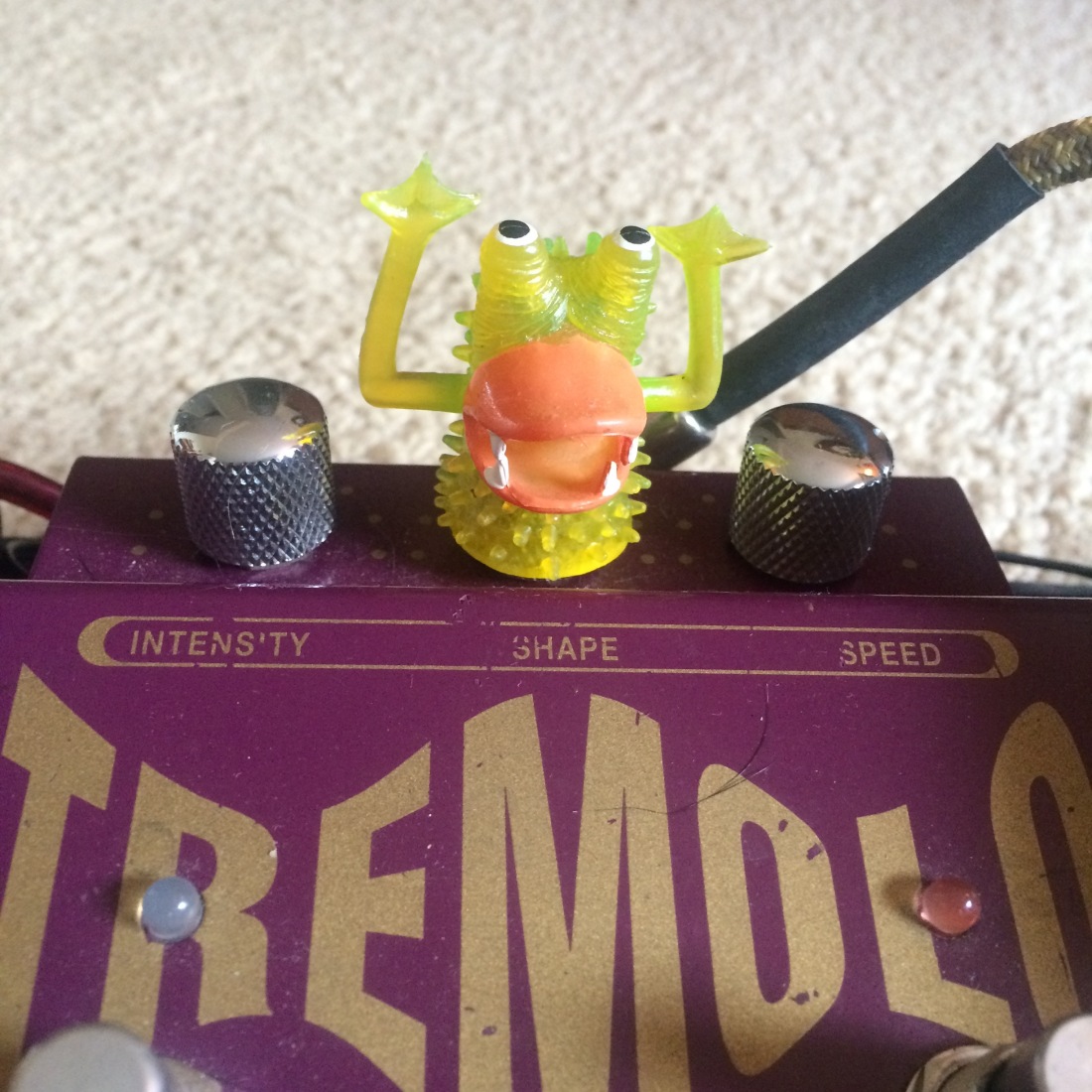 5. I’ve heard mixed reviews on those Dunlop Tremelo pedals. Give me your quick review of it. Also, that big-box Memory Man looks like a slightly older one — late-‘80s/early-‘90s before the reissues? Totally drool-worthy. What do you like most about it?

The Dunlop Tremolo works fine for me, and I’ve had it for about 20 years. There was a time when I couldn’t get it to go as fast as it originally did, but some friendly elves must have come and secretly fixed it one night because it started working again. I think there are less expensive alternatives that work just as well or better, but that’s what I got. It takes up a lot of room – like the Memory Man – which is also about 20 years old. I can do some fun stuff with the chorus effect on the Memory Man when recording, but live, I pretty much use it as a straight delay. 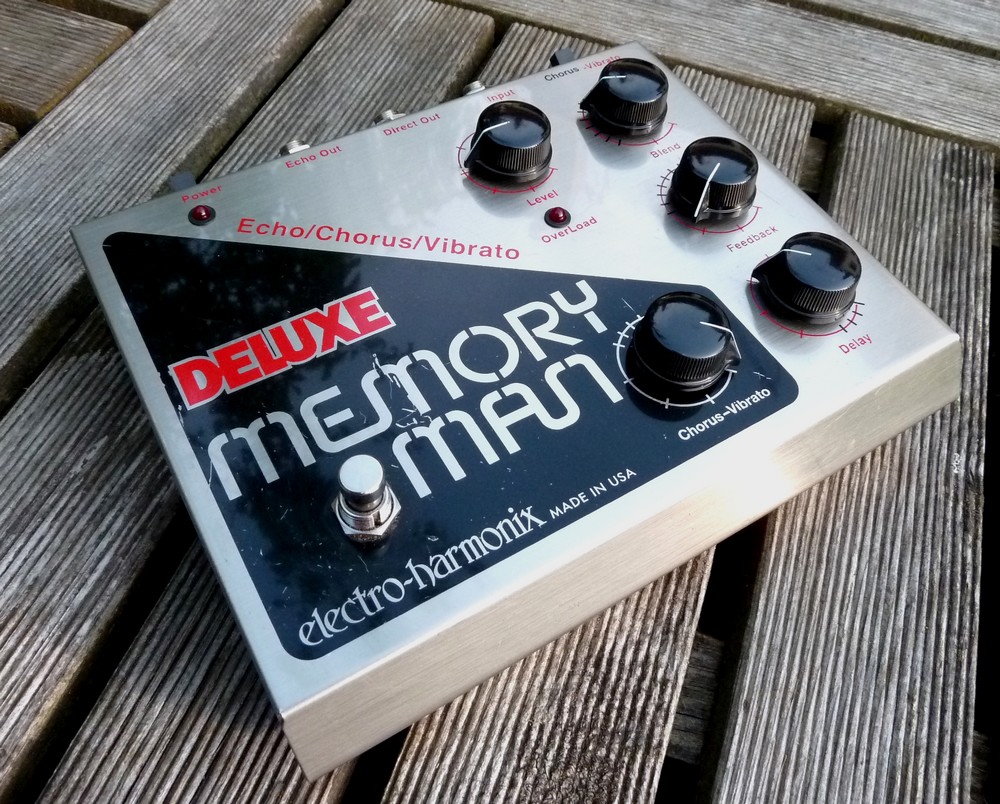 6. If you could get one piece of gear for one of your bandmates as a gift — what would you get, who would it be for, and why?

I think I would get Jozette a giant Orange Amps full stack that would tower over her. She loves those amps, and I think it would be fun to see such a tiny woman with such a giant rig. Of course, I would wind up loading and unloading it, so maybe I should rethink that… 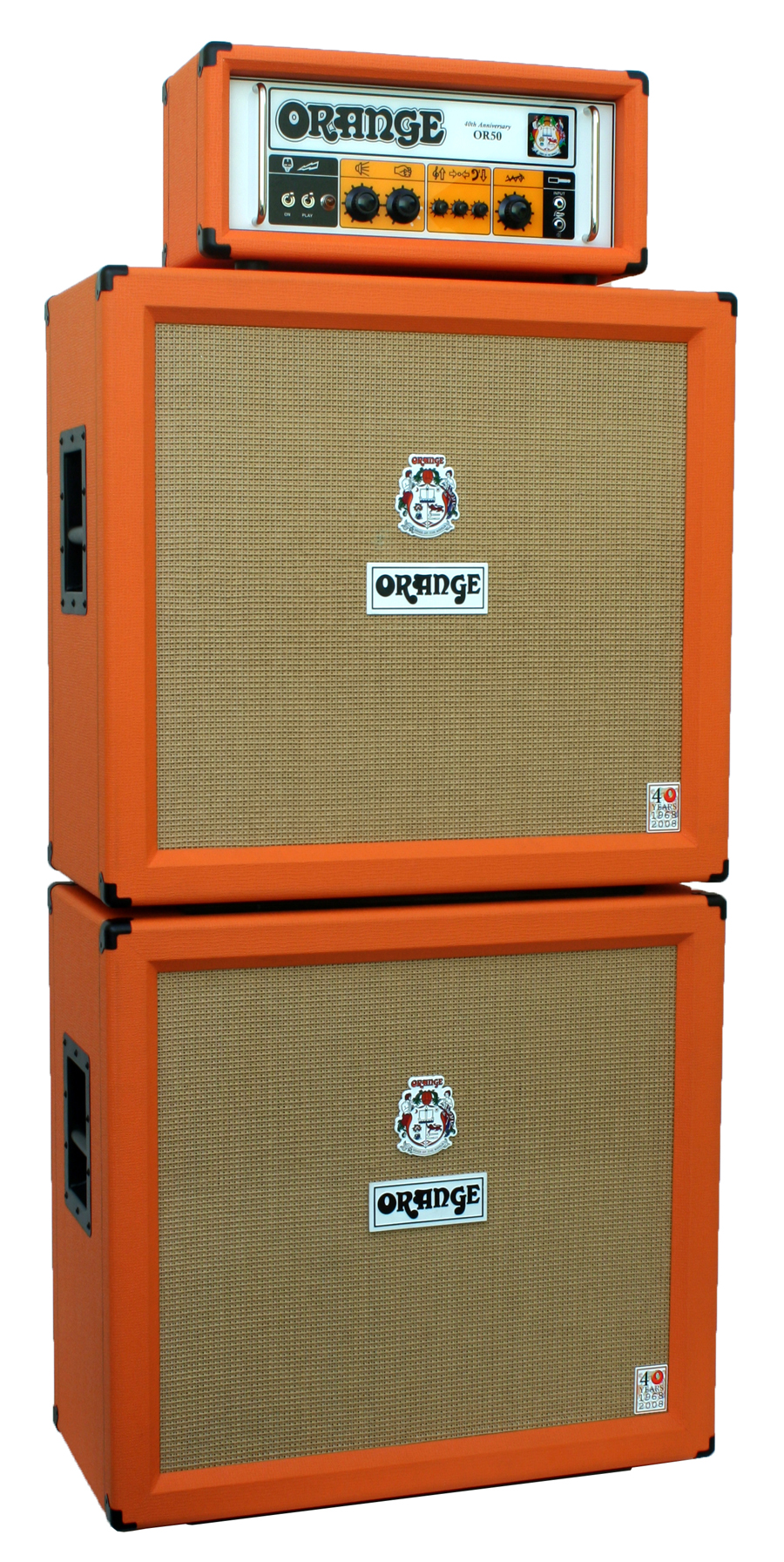 7. What’s your favorite Oxen song to play live and why?

Probably “Glass Pastures” just because it’s weird and has a lot of fun little parts.

See The Oxen at The Merrow on Saturday, Feb. 17, with Nowhereland and Sweet Myths. They’re also up for Best Rock Band at the 2018 San Diego Music Awards (vote for them here)