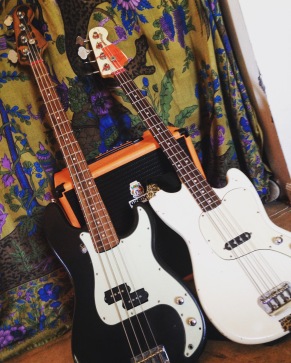 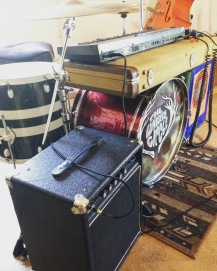 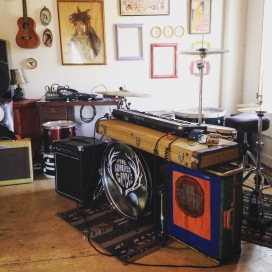 Comment below, on the Gear and Loathing Facebook page, or email gearandloathinginsandiego@gmail.com to be entered to win a pair of tickets to The Whiskey Circle’s EP release show at the Music Box on June 23!

1. Tell me about your current rig: For example, why do you use the gear you’re currently using? Best parts? Worst parts?

I guess it all depends on which rig we’re talking about? My main project is The Whiskey Circle with my wife Leanna, but I also play my upright bass for some local bands when needed and produce instrumentals with my brother in a project we call “Dream Queen.” For The Whiskey Circle, I play drums and keys at the same time. I’d prefer to just have separate people playing their own instruments, but at one point The Whiskey Circle was just a 2-piece and we felt the need for something more than guitar and drums. I was inspired by Shovels & Rope for the basic drum kit and keyboard combo.

For the most part, the drum kit I use is a Gretsch Catalina Club that we refer to as “Beetlejuice.” However, the 26″ kick in that Gretsch kit takes up too much space on the road and my Roland Juno kept falling off the top of it. So now I use a 22″ kick that came with a no-name, made-in-Japan kit that I scored off CL for $5. When I play live, I never play with more than a kick, snare and floor tom. When we record, I’ll mix the two kits together (13” and 14” rack toms and 16” and 18” floor toms) and make a 6-piece kit with the 26″ Gretsch kick to get that boom. When we play live, I always use small cymbals (Paiste 13″ hi-hats, 14″ thin crash and 20″ light ride), when we record I like to add a second ride and stereo crashes. My goal when playing for The Whiskey Circle is to always be quieter than Leanna’s vocals and let her be the focus of the song. When there’s a voice like hers in the band, it should never be drowned out by the instruments.

For the “organ” part of the rig, I currently use a Roland Juno Alpha-2 with a Behringer reverb/delay/echo pedal and a Marshall overdrive pedal through an Acoustic B20 bass amp for the low end. The pedals help the Juno not sound like a 1985 MIDI synth (which it is and why I originally bought it), but more like the organ on all of our recordings, a 1976 Kimball Entertainer.

Another cool thing about The Whiskey Circle is the other guitar player, Collin Webb, and I switch between drums and guitar throughout the set. The whole musical chairs thing started back when Daniel Cervantes was playing with us and he wanted to play drums on some tracks (if you didn’t know Dan is a drummer too then you’re missing out). It’s also really hard for me to sing the songs I wrote on guitar while playing drums and organ. Collin and I combine our pedals (although most of them are his) to get what you see in the picture. A lot of cool delays, shifters, modulars, fuzz and most importantly that Boss tuner. Collin plays that red Fender tele and I play Leanna’s daphne blue Mustang. Collin and I both play through his 12″ Fender Blues Jr.

Lastly, you’ll see the two fender basses and the Orange 1×12. Bass is my first instrument and my first love. I’ve recorded the bass for all of The Whiskey Circle tracks in the past and was playing bass in the band originally. My main live bass is the white reissue Fender Musicmaster with new Seymour Duncan pickups. My other bass is a P bass that was pieced together from CL parts: Squier P bass neck, MIM body, DIY surf green pick guard and pickups out of a 1971 American. This is the bass that has been recorded on all of The Whiskey Circle tracks. It needs some TLC as some of the higher frets are not quite right, but if you know how to make it work, then it’s the best thing ever. The Orange amp is a newer 1×12 Crush that was upgraded to 100w, new Jensen speaker and a 3″ tweeter installed to pick up some of the highs when we use the Bass Muff. It’s plenty loud enough to compete with the 12″ fender blues amps we all play with. This is the amp that our bass player uses live.

2. What song of yours do you feel is the best portrayal of your particular sound/style?

This is the demo version of one of the tracks off the new High Deserts EP called “Beaches.” It’s a song about everything I love: Leanna, CA, decriminalizing weed and riding bikes/motorcycles. It’s the first track that I’ve engineered and recorded everything on. Every piece of musical equipment that we own was recorded on the track (all three guitars through the Fender Blues Jr.) and also a Fender Champion (not pictured since we never use it live), the P bass and the Musicmaster (yes double bass tracks are the shit), and the Gretsch kit. It was definitely a pain multi-tracking by myself, but in the end, I think the track has a really nice “if the Velvet Underground hung out with The Blank Tapes in OB” sort of vibe.

3. If money was no object, what’s the holy grail piece of gear you’d buy?

I want everything in this video, but most importantly Jack Bruce’s Gibson EB complete with still-lit cigarette burning on the headstock.

4. Who is the musician you admire the most sound/gear-wise?

Gear-wise, I would say Kurt Vile.

Music production/badassery-wise, I would say Dave Grohl. He’s from the DC area like me (we had the same HS PE teacher) and he played drums in 2 of my favorite bands, Scream and Nirvana. Not to mention his philosophy on drumming, like my favorite drummer (Ringo), is the best thing ever.

5. What do you have coming up that we should know about?

We are about to release our High Deserts EP via Wiener Records on June 17 with a music video and tour to help promote. [INFO] Our official EP Release Show is Thursday, June 23, at The Music Box with Jimmy Ruelas, Bad & The Ugly and Gary Hankins & the Summer Knowledge. [INFO/TICKETS]